Movie Review: Need to be ‘Big Men’ Comes from Greed 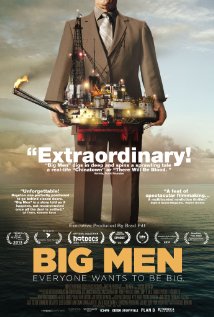 The Rich Get Richer and the Poor Get Poorer

Greed is the universal language.

It knows no ethnicity, nationality, socioeconomic status, or religion.

When billions of dollars are at stake, some people would even hurt their own mother to get their piece of the pie.

As the people of Ghana often say, everyone wants to be a big man or a big woman.

A big man is simply a man with a lot of power and wealth.  The documentary “Big Men” proves just how crooked good people can become when the first traces of oil are discovered off the coast of Ghana.

In “Big Men,” filmmaker Rachel Boynton captures the behind-the-scenes negotiations between Dallas-based Kosmos Energy and the GNPC, which is the government-run entity that controls Ghana’s oil pipelines.

Eleven billion dollars are at stake and the leaders of Kosmos Energy must deal with a crooked government, stock market plunges, the election of new government officials and militants who are sabotaging the oil pipelines.

Many civic leaders do not want Ghana to fall into the same trap of greed as their Nigerian counterparts.  In that country, citizens still struggle to make a decent living despite the rich resources of the country because politicians choose to steal oil revenue and not create opportunities for their citizens.

Ghana’s true leaders want to see the profits spent on education and healthcare, not on the lavish lifestyles of the rich and powerful.

As a Nigerian journalist stated, before oil there was civility in Nigeria.  Now that Ghana has oil, their civility begins to turn to greed as well.

“Big Men” does a wonderful job in highlighting the realities of the African continent.

Despite rich resources like oil, many African countries suffer from an unusually extreme wealth gap.

Because the governments run the oil industries, the money never trickles down to the working class.

In essence, the rich get richer and the poor get poorer.

Boynton does an excellent job of showing the royal lineage of many African tribes and shows pieces of their culture like traditional African dance and dress.

Although the film is shot beautifully, at times it suffers from some shaky photography.

Furthermore, those not in tune with what goes on in the conference rooms of major corporations or on Wall Street may find some of it perplexing.

Nevertheless, Boynton shows just how cutthroat major corporate deals can become and how greed can corrupt even those with the best intentions.