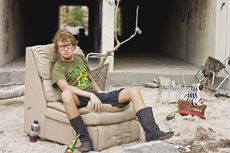 What Do You Think?

The documentary “Lost in America” will make people take another look at their opinion of homelessness.

What do you think when you see a homeless person panhandling on a street corner?

Do you see a drug addict?

Do you see a person who made mistakes and is reaping what they sowed?

Or do you see someone who had no choice but to live on the streets to avoid the chaos that they experienced in their past?

What if that homeless person is a teenager?

Does your opinion change?

Or do you just see someone rebelling against authority figures so that they can live a life of substance abuse and/or sexual promiscuity?

Do you see them at all or do you just ignore them, completely?

Like it or not, many Americans simply ignore homeless youth in this country.

As a result, their existence is often lost or forgotten because many people do not see the underlying issues that led to their predicament.

The documentary “Lost in America” takes to the streets to find these forgotten youth, giving them a platform to enlighten people on the harsh realities of youth homelessness.

As a journalist or documentary filmmaker, people learn never to get too close to their interviewees so that they do not develop a bias towards or against them.

They do not inject themselves into the story.

But what if the reporter/filmmaker has lived the story that he or she is documenting?

It then becomes difficult to look at those interviewees as just sources.

Those sources become a source of inspiration to change dire situations for the better.

But unlike some survivors, he had the opportunity to shed light on the plight of teenagers forced out of their homes for various reasons via filmmaking.

What makes “Lost in America” effective and heart wrenching is that the humanizing stories will make moviegoers empathetic.

Often, people do not see people when they see a homeless person.

Unfortunately, many see a nuisance begging them for money so that they can go get drunk or high.

But everyone in that situation did not make mistakes to land under a bridge or behind a dumpster.

“Lost in America” highlights a couple of LGBT youth, kicked out of their homes because of their sexuality.

One was shunned from his Pentecostal church and forced to live in a shelter.

One person was beaten by his father for being transgender.

A young couple had jobs and roommates.

But what happens when everyone in the apartment loses his or her job?

A life on the street becomes their reality.

Even more heart wrenching is what happens to a premature baby born to a homeless couple?

Is that baby discarded like his parents because of their living conditions?

Or is that baby seen for its humanity and potential?

“Lost in America” does a good job of injecting “success” stories.

When some people see successful entertainers or successful titans of business they simply see the ending of the story and not the beginning.

“Lost in America” includes some great interviews with celebrities like Tiffany Haddish who survived the foster care system to become one of the brightest comedic actresses of this era.

Haddish explains that when children age out of the foster system, they are often given 30 minutes to pack up all of their belongings into a black trash bag and fend for themselves for the rest of their lives.

What if the homeless person you pass on the streets becomes the next Haddish, Tyler Perry or Steve Harvey?

Although “Lost in America” highlights some of the success stories, the biggest failure has to be at the hand of politicians who would not even fund a study on how many youth are homeless in America.

Estimates of homeless young people range from 40,000 to four million.

Although Congress failed to fund a study of homeless youth, they did fund a study to determine why chimps like to throw poop.

That money could have been thrown towards children forced to live on the streets, hungry and harassed by other older homeless people.

Despite the anger that might come from watching some politicians ignore the issue of youth homelessness in “Lost in America,” the documentary could not have come out at a better time.

Timing and positioning is everything in business.

If a person puts out a project at the wrong time, the right people might not heed the message.

But 2020 has opened people’s minds to many of the injustices happening throughout America.

Streaming services made the film “Just Mercy,” starring Michael B. Jordan and Jamie Foxx, free to rent because the nation has come to a crossroad when it pertains to police brutality and systemic racism.

Viewers of “Just Mercy” have become more receptive to the movie’s message, and many have watched with open eyes, ears and hearts.

The coronavirus pandemic has also changed the world in 2020.

With companies shutting down and people losing their livelihood, many people now know that they could be homeless at the drop of a dime through not fault of their own.

Therefore, “Lost in America” might make people more empathetic to the struggles of their fellow man.

“Lost in America,” now available digitally and on DVD, should definitely make them take another look at a serious epidemic that did not always exist in America.