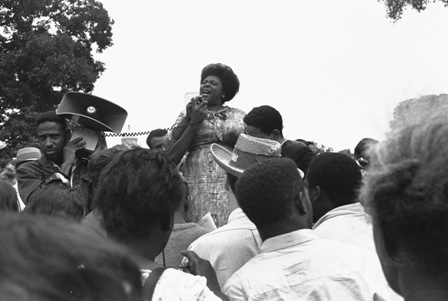 The catch-22 for documentaries with a familiar narrative is that usually the story has been told a thousand times.

For history’s sake, documentaries are extremely important to make sure that the truth is not lost to people’s inaccurate revisions.

Mississippi’s freedom summer in 1964, organized by the Student Nonviolent Coordinating Committee (SNCC), and the brutal murders of civil rights workers James Chaney, Michael Schwerner, and Andrew Goodman has remained in the nation’s conscience for the past 50 years.

The documentary “Freedom Summer,” written, produced and directed by Stanley Nelson tells a side of the story that many might not be aware of and the true story gives history buffs a greater appreciation of what the Freedom Summer accomplished.

History now tells us that the freedom rides had a significant influence on President Lyndon B. Johnson’s decision to sign the Voting Rights Act of 1964.

The bill did away with literacy tests and other measures in place to prevent the Black vote in Southern states like Mississippi, which eventually led to countless African Americans holding office including President Barack Obama.

Nevertheless, Freedom Summer had a more personal impact on race relations throughout the country, especially with young college students.

Although SNCC and its Black membership organized the voter registration drives in Mississippi, the majority of the volunteers were White college students who believed in the cause for equal rights.

Many White volunteers had been taught that all Americans had equal rights but that summer was a true eye-opening experience for them.

Volunteering for SNCC’s voter registration efforts meant that they would have to put their lives on the line for the rights of others, whether they realized it or not.

Honestly, many of the African American volunteers falsely believed that White residents of Mississippi would not harm them since they were in the company of Whites.

For many of the White volunteers, the 10 weeks in the summer of 1964 was the first time in which they had to take orders from Black superiors.

Furthermore, Whites had to live in the homes of Black Mississippi residents over the summer because obviously local hotels would not accommodate outside “agitators.”

Many, if not all, of the White volunteers got a lesson on race relations that could not be learned on the battlefield of justice.  In order to truly get to know someone you have to live with that person, and both races got an education on acceptance, tolerance and other cultures throughout the summer of 1964.

The most fascinating aspect of “Freedom Summer” is the fact that Black children were not taught Black history, culture or literature in Mississippi schools so SNCC set up Freedom Schools throughout that summer to teach them the beauty of their heritage.

Even some Black parents, who were not formally educated, took advantage of the Freedom Schools.

Most importantly, “Freedom Summer” highlights the efforts of Fannie Lou Hamer, a woman so oratorically gifted that she could reach the hearts of sharecroppers and the hearts of United States senators.

Her story deserves more Hollywood recognition in an era of popularity for biopics.

The only thing that deserves criticism is the fact that the film got off to a slow start, especially for those somewhat familiar with the story.

Nevertheless, the filmmakers spend the majority of the film telling the untold story and how the summer of 1964 even changed the hearts of many hardened bigots in Mississippi.