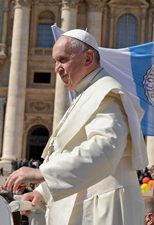 The documentary “Pope Francis: A Man of His Word” is the pontiff’s sermon to the world.

Rock star status has followed Pope Francis since his installation as head of the Catholic Church.

But more importantly for some, Pope Francis embraces modesty.

In the new documentary about the head of the Catholic Church, filmmakers do a great job of showing how Pope Francis found inspiration from Francis of Assisi, who dedicated his life to helping the poor, hungry and forgotten citizens of the planet.

The documentary “Pope Francis: A Man of His Word” is the pope’s sermon to the world about the temptation of money and greed, the danger our planet finds itself in because of climate change, relations with people of other religions and the way Christians should handle mass migration/immigration because of political persecution.

Like his namesake, Pope Francis feels that if society could better help the poor and disadvantaged, the world would not have many of the problems that currently plague the planet.

Many of the world’s problems exist because of money or a lack thereof.

The temptation for money leads to greed.

The temptation for money leads to the oppression of others.

And the temptation for money leads to crime from those who do not have it and those who are willing to do anything to obtain it.

Pope Francis believes that if the haves give more to the have not’s, and go without some of the luxuries of life, many of the world’s problems would cease to exist.

The fact that many cannot find work throughout the planet leads to a lack of dignity and loss of hope for many people, especially men who cannot feed their families.

On the subject of climate change, Pope Francis believes that protecting the planet is a biblical responsibility.

Man has caused the planet to deteriorate because of big business, greed and neglect.

Unlike some Christians, the pope finds unity amongst religion and science and believes the two works hand in hand.

In “Pope Francis: A Man of His Word,” the pontiff travels the world with a message of hope, given in his own charismatic and comedic way.

From children to the elderly, many people break down in tears just at the sight of the man.

Despite the love that the pontiff receives throughout “Pope Francis: A Man of His Word,” the documentary does not allow him to escape answering the tough questions like the church’s stance on homosexuality and pedophilia amongst Catholic priests.

He never dodges questions, answering with love, compassion and truth.

But the truth of the matter is Pope Francis has become so beloved because he practices what he preaches from a modesty standpoint.

Not just advising Catholics to live on less and give more, Pope Francis does the same thing.

Instead of living in a luxurious mansion, Pope Francis lives in a modest apartment.

The pope has a modest automobile and he has forsaken many of the material benefits that come with presiding over the Catholic Church.

Never before had a pope come from a South American country.

His election as pope represented a break through for many from Latin America who had grown accustomed to only one kind of pope from similar places.

To see the pride in the faces of the people in Latin America will remind many of the pride seen on the faces of many African-Americans when President Barack Obama became the 44th president of the United States.

Besides his charisma and sincerity, Pope Francis possesses the rare ability to preach to people without preaching at people.

He never strays away from what he feels is biblical truth, but he chastises from a loving and caring place, not an overly judgmental or arrogant place.

That skill, unfortunately, has eluded many good Christians who find just as much dismay at the state of the world as Pope Francis.

That talent might make the gospel more acceptable for those that criticize or doubt the importance of the church.

However, several aspects of “Pope Francis: A Man of His Word” might be turnoffs to those outside of the Catholic faith.

Critics of the church might think that the documentary does not spend enough time addressing the priest/molestation controversy that has rocked the church over the last few years.

The documentary touches on the scandal, but spends more time criticizing the affairs of the world and not the internal affairs plaguing the church.

Furthermore, the reenactments of the impact of Francis of Assisi might come off like a cheesy silent film from yesteryear and not on the level with current standards of filmmaking.

Additionally, having to read subtitles for the majority of the film might be a turnoff for those not fully interested or fascinated with the story of Pope Francis.

“Pope Francis: A Man of His Word” would also benefit if it gave moviegoers more background information on the pope’s formative years.

The documentary spends more time depicting the life of Francis of Assisi than it does Pope Francis.

Nevertheless, seeing the pope’s charm, charisma and caring personality on film for an extended period of time makes it apparent that the Catholic Church is in good hands with Pope Francis.

His main mission is to show the humanity of the church and not the excess of some congregations.

Although the church is huge and often run like a corporation, the earthly CEO of the Catholic Church is approachable like the owner of a mom and pop company.

He does not sit on a pedestal and look down upon the commoners that he presides over.

Pope Francis instead has remained a commoner.

Now, he is just a commoner with an uncommon responsibility.

And the Catholic Church is blessed to have such a responsible, responsive and reflective leader who is more concerned with service than stardom.