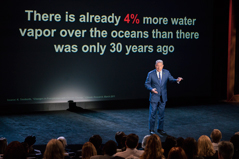 An Eye-Opening Wake Up Call to the World

Geniuses usually get mocked before they get praised.

Geniuses usually are seen as unintelligent to those not on their level.

Unfortunately, Gore never saw the inside of the Oval Office as president of the United States because the common man often relates to the common president.

However, common is not always a good thing when it comes to climate change and global warming, and having a genius in the White House is something that would benefit the United States in the fight to save the planet.

The documentary “An Inconvenient Sequel” paints a decent picture of the ridicule that Gore received from the political right just for being smarter and wiser than the common man, and the threat to genius posed by President Donald J. Trump.

“An Inconvenient Sequel,” the follow-up to the Academy Award winning documentary “An Inconvenient Truth” follows Gore as he continues to train climate change advocates while facing backlash and regression from the Trump administration and the oil companies who “own” politicians to the detriment of the planet’s future.

The 2000 Democratic nominee for president crisscrosses the globe from Houston, Miami, Greenland, and Paris to Hammond, La. and Georgetown, Texas to educate the world on why there is so much flooding in areas like Houston, south Florida and southeastern Louisiana.

Many falsely believe that cities like Houston have not developed the city well enough to fight flooding.

But the real reason, according to “An Inconvenient Sequel,” is because of climate change.

Global warming has caused every year to seemingly become the hottest year on record and the reason is because of greenhouse gas emissions.

Gore’s mission is to get cities around the world to become 100 percent solar or use all renewable energy.

Unfortunately, the powerful oil companies and the current White House fight tooth and nail to maintain their profits and power even at the peril of humans’ very existence.

With all of the science provided by “An Inconvenient Sequel” and its predecessor, doubters like Trump think those that believe in climate change are insane.

Unfortunately for America and the world, Gore is far from insane but he never made it to the Oval Office as president.

Therefore, his mission to save the planet is harder than it could have been.

The documentary “An Inconvenient Sequel” is an eye-opening wake up call that is much needed today.

However, two things work against “An Inconvenient Sequel.”

The first negative is that it can become repetitive.  The documentary, obviously, presents the same narrative just in different scenes/cities.

Secondly, “An Inconvenient Sequel” will probably be so inconvenient for doubters of climate change, that they will not educate themselves by watching the documentary.

Nevertheless, “An Inconvenient Sequel” is a testament to how educated and intelligent Gore really is.

Geniuses are not just geniuses because of their acumen.

Many geniuses are seen as such because of their wisdom, open-mindedness and willingness to learn new things and grow.

If only someone willing to grow enough to become a grown-up was in the White House.

But who knows, maybe other geniuses can convince Gore to run for the highest office in the land again in 2020.