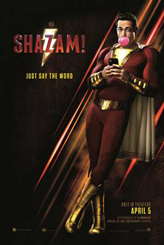 A Superhero Movie for the Ages

Walking into the movie theater to watch an advance screening of “Shazam!,” the most common word spoken by those watching it for the second time was fun.

The thing about superhero movies and comic books is that they service a certain niche fan base.

Although that fan base is arguably much larger than any other movie fan base, just check the box office results for DC Comics and Marvel Studios movies, superheroes do not do it for everyone.

However with “Shazam!,” DC Comics has produced a superhero movie that all demographic groups will love, even those who do not have an affinity or obsession with comic books.

The humor in “Shazam!” will produce laugh out loud moments for all age groups.

The drama surrounding the children in “Shazam!” will tug at the heart of moviegoers of all backgrounds.

The technology and pop culture references will be something that all generations can relate to.

And the unity amongst the children, despite their differences, will inspire.

But what is most important is that the superhero will have a chance to save the day and save Earth from utter destruction.

In “Shazam!,” Thad (Ethan Pugiotto) is what the old folks would call a peculiar child.

His older brother constantly bullies him.

And when he cries to his father for support, all his dad does is point out all of his weaknesses while urging him to stand up for himself like a real man.

He is obsessed with the idea of magic and sorcery, given his brother ample material to ridicule him with.

However, on a dark and desolate drive with his father and older brother in upstate New York, young Thad is mysteriously transported to a wizard’s lair.

The Wizard Shazam (Djimon Hounsou, “Captain Marvel”) is at a crossroad in life.

The wizard knows that he is dying and he needs someone that is pure of heart to take his place and defend the people of the world against the seven deadly sins, which are trying to penetrate the seven realms.

The Wizard Shazam has tried for years to get someone to take his place, especially after the deaths of his brothers and sisters.

However, he constantly fails to find someone who is truly pure of heart and innocent.

Although he thinks he has found the right one in Thad, the young boy proves that he is not strong enough to avoid the temptation that will come from being the next, Shazam.

Fast-forward into modern times, and The Wizard Shazam is no step closer to finding his replacement.

And unfortunately in modern times, foster child Billy Baston (Asher Angel) is no step closer to finding his real family in “Shazam!”

The teenager has a good heart and is a good child.

However, he has built a reputation for running away from every stable home he has been in trying to find his birth mother who he got separated from at a fair as a toddler.

Billy has transformed into a mini-detective tracking down numerous people with his mother’s name, but never reconnecting with his beloved mother.

CPS finally puts him in a home, run by former foster children, and filled with numerous foster brothers and sisters.

However, the new sense of family still does not make up for the fact that Billy still misses his biological family.

He even has a Superman bullet as his prized possession.

Freddy immediately takes a liking to his new foster brother and roommate.

However, to Billy, Freddy is extremely weird and eccentric.

But to see Freddy, who is handicapped, get bullied at school brings out the real big brother in Billy.

The chronic runaway stands up for Freddy like very few have stood up for him when bullies pick a fight with him at school.

Apparently, The Wizard Shazam has found his replacement in Billy who thinks that the wizard is a joke, especially his name.

But when Billy wakes up on a subway as a grown man, fully dressed in superhero attire, he has to realize that the wizard’s decision is final.

The problem is how does Billy explain going from a teenager to a fully-grown man in a matter of minutes?

And how does he stop his foster parents from thinking that he has just runaway from home like all of the previous times?

But Shazam’s (Zachary Levi, “Thor: Ragnarok’) real problem is not his foster parents.

Shazam’s real dilemma is the fact that the Wizard has made several enemies through the years and one of those enemies is determined to unleash the seven deadly sins onto the world, destroying all seven realms.

Unfortunately, the only person that can stop this from happening is a teenage superhero who is more interested in taking selfies with fans for a fee and using his power to recharge people’s cell phones in the mall.

“Shazam!” might be the most fun superhero movie in recent years.

Its comedy is better than “Deadpool” and “Ant-Man.”

Furthermore, the comedy is more child and senior citizen friendly, appealing to all age groups without resorting to corniness.

To create a movie that is relevant to all age groups without becoming corny is extremely difficult to do.

While Angel, Grazer and Levi are the stars of “Shazam!,” Faithe Herman who plays Billy’s foster sister Daria provides the film with its innocence and adorability.

Additionally, Levi deserves a lot of props for playing a grown man with a child’s mentality and a child as a best friend.

That nuanced role of Shazam, part adult and part child, probably explains the universal appeal that the film “Shazam!” will have.