Film Review: ‘Ted 2’ Great for Those Who Don’t Take Themselves Too Seriously 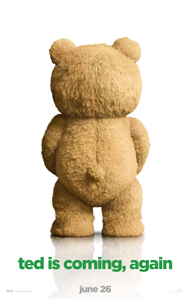 What makes one a human being?

Is it society’s old school definition that defines people as human beings or has society been intolerant in its view of mankind?

Can a teddy bear be considered a human being if it can talk and has emotions?

If so, why should society be able to stop a teddy bear from marrying a beautiful woman?  Love is love.

John’s (Mark Wahlberg) best friend Ted blessed him with every child’s wish of coming to life.

Because of Ted’s transformation into a living being, their bond has simply continued to grow throughout the years.

They have partied together, smoked weed together and taken road trips together.  But in the eyes of the state of Massachusetts Ted is not a person, only property.

In “Ted 2,” the title character seems to have it all.

He has married his sweetheart Tami-Lynn (Jessica Barth).

The newlyweds have what some may describe as an apartment.

They have great jobs as cashiers at a local grocery story.

Nevertheless, as in any “marriage” the couple experiences difficulties.

When Ted’s co-worker Joy (Cocoa Brown, “Tyler Perry’s Single Moms Club”) suggests that children are the only way to make a marriage last, Ted and Tami-Lynn are all in.

Joy even has proof for her theory as she points out two happy White N-words with a baby who are all over each other in the grocery store.

However, the couple runs into a little trouble because Ted does not have the right plumbing to clog the necessary hole.

The couple needs a sperm donor and when actor Sam Jones refuses because of his drug use, and attempts to steal Tom Brady’s specimen proves unsuccessful, they turn to John to help them achieve their goal of becoming parents.

What should be a joyous time in the couple’s life turns tragic when the state of Massachusetts deems Ted property.

That decision forces his boss to fire him from the grocery store and the state to annul his marriage to Tami-Lynn.

As Jackson stated to the jurors, there was a time when Dred Scott was considered property and not a person.

Therefore, does the court want to end up on the wrong side of history?

“Ted 2” is crude, sophomoric, juvenile, offensive and beyond hilarious.

Critics might describe “Ted 2” as immature, fraternity house humor and it is.  That is why so many people rightfully love this franchise.

“Ted 2” is great because it does not take itself too seriously.

It just goes to great lengths to make moviegoers laugh out loud and thanks to filmmaker Seth McFarlane it achieves its goal.

I think I even laughed so hard at one joke that some saliva came out of my mouth but that’s probably too much information. My bad!

Ted needs a last name to sue in court and the name he creates is Clubber-Lane as in Mr. T’s character in the “Rocky” sequel.

Not only is Ted compared to Dred Scott, his categorization as property reminds him and John of Kunta Kinte in “Roots.”

McFarlane even gets Morgan Freeman to take on a lighter role in the same vein as his role in “Last Vegas.”

“Ted 2” is also very informative as moviegoers learn via the Comic-Con scene that Jonah Hill will be the next actor to portray Superman on the big screen.  Let’s pray that’s really a joke!

Unfortunately, many moviegoers will be offended with the use of racial and homophobic slurs.

Hopefully, those that see “Ted 2” will not be as sensitive as the general public when it comes to jokes because if they can take a joke, “Ted 2” will take them to a great place of pure laughter.