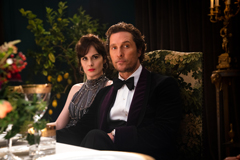 If Dr. Dre and Snoop Doggy Dogg (at that time) made marijuana the thing to do in 1992 with “The Chronic” album, and further solidified that reality with the 1999 album sequel, then filmmaker Guy Richie has fully taken dope further into this millennium with the clever film, “The Gentlemen.”

As gangster movie diehards can attest to, many of the most “successful” drug dealers in the world came from extremely humble beginnings.

Like Rap-a-lot Records founder James Prince would say, the desire to lift one’s family out of poverty forever will have a person doing extreme things just to crawl out of that hole that life put them in.

Therefore, waiting to finish college and working up the corporate totem pole on a regular nine to five just seems too slow of a grind for those that have lived in the meat grinder of life for years and even decades.

As a result, drug dealers will sell products that they know are illegal, and have dire consequences on the people who partake in drugs because it represents an opportunity to gain the type of lifestyle they so desperately yearn for.

In “The Gentlemen,” Mickey came up dirt poor.

However, he had the brains to make it all the way from America to Oxford University, studying with the elite and bourgeoisie of England.

But while at Oxford, Mickey finds he has a gift for selling weed and begins making so much illegal money that the legal money awaiting him once he finishes his prestigious college degree means virtually nothing to him anymore.

However, what come with the wealth of the drug trade are the possibility of imprisonment and the threats of rival drug crews willing to do anything to take their spot, civilly or uncivilly.

In “The Gentlemen,” Mickey Pearson (Matthew McConaughey) exemplifies the conundrum that drug dealers find themselves in perfectly.

Not only does Mickey have to fight off rivals and haters, but he also has to fight off the inevitability that his business might not have a bright future with the legalization of marijuana probably coming in the next 10 years.

And he has to face all of these dilemmas while maintaining his reputation of being a gentleman in a business filled with cutthroat gangsters.

“The Gentlemen” begins with a bang, literally.

Mickey walks into an empty bar and orders his usual from the bartender.

But while sitting down comfortably in a chair, someone points a gun in Mickey’s direction and pulls the trigger.

“The Gentlemen” then basically becomes a whodunit and what for.

One of the possible culprits for Mickey’s demise is Fletcher (Hugh Jackman), a private investigator/wannabe screenwriter offered $150,000 to find dirt on Mickey and bring his operation down.

Fletcher breaks into Ray’s (Charlie Hunnam) home to inform him of the in-depth dirt that he has on his boss, Mickey.

The private investigator lets Ray know that he has received an offer from a local newspaper to find dirt on Mickey for $150,000 but will turn on the newspaper if Mickey’s organization gives him $20 million to suppress the alleged dirt.

After forcing his way into Ray’s home, Fletcher details how he thinks Mickey’s entire organization runs and what actually occurred with that gunman and Mickey in the bar with his screenplay entitled “The Bush.”

Fletcher’s vision for the film is totally old school, shot on 35-millimeter cameras.

Another possible culprit could be Matthew (Jeremy Strong), a Jewish billionaire from Oklahoma who wants in on Mickey’s marijuana empire.

Mickey has offered Matthew his business, which includes 12 hidden weed farms, for the nice, round sum of $400 million.

Nevertheless, $400 million is still a steep price to acquire an illegal business, even for a billionaire.

Yet another possible culprit could be Dry Eye (Henry Golding).

Dry Eye has heard that Mickey plans to leave the dope game and he too has an offer to buy the marijuana business.

However, his offer does not even come close to Mickey’s proposed deal with Matthew.

And when Mickey has some choice words for Dry Eye, he possibly creates another enemy who would want to destroy the marijuana business titan.

“The Gentlemen” is shrewd and cleverly written.

Unfortunately, “The Gentlemen” does have some uninteresting or boring moments throughout the film that prevents it from truly becoming great.

Nevertheless, the stars of “The Gentlemen” do their thing, namely Jackman.

He brings a dose of humor to the aristocratic movie, “The Gentlemen.”

The well-written script in “The Gentlemen” also brings a regal, savoir-faire style to the movie.

The elegance is believable because although gangsters have a stereotype of being unsavory characters, one can imagine the gangsters of Great Britain’s royal class having a certain level of sophistication that would separate them from the other gangsters around the less civilized parts of the globe.

But despite the high that “The Gentlemen” brings, the movie does have a few sober moments, which prevents it from producing the euphoria that other tales of cannabis have produced in the past.

Nevertheless, what “The Gentlemen” might eventually represent is the last of a dying film genre.

With weed going mainstream, great marijuana movies like “Friday” and “Dazed and Confused” will seem less dangerous as the years and decades pass by.

However, there was once a time in which weed was so taboo, its mere presence on a compact disc sent shockwaves throughout the entire music industry because how could an entire album be dedicated to marijuana.

But “The Gentlemen” might put a bittersweet nail into the marijuana movie machine, and if that is the case the genre goes out in a dignified note.