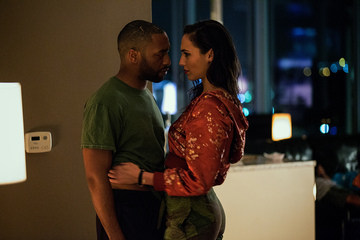 Thanks to Dr. Dre’s 1992 album “The Chronic” every card-carrying member of the hip-hop community is somewhat familiar with police code.

Because of Dre and Snoop Dogg, many know that a 187 is a homicide.

Likewise, many know that a 211 is a robbery.

But fewer may have known that a 999 means a cop has been murdered in the line of duty.

In “Triple 9,” Michael Atwood (Chiwetel Ejiofor) has gotten in too deep with the Russian mob.

He has a son Felix (Blake McLennan) with one of their women, Elena (Gal Gadot), and he is forced to commit crimes for them like bank robberies or face fatal consequences.

Police officers will be closing in on their trails within a few minutes so pulling off a 10-minute robbery is virtually impossible.

The only way to pull it off is to create a distraction by killing a police officer, better known as a 999, because all officers would want to apprehend a cop killer.

But the only problem with the crew’s plan is that they are also police officers themselves.

Instead it brings a unique approach to the crooked cop dynamic.

“Triple 9” succeeds in showing that many cops are heroes while many are not.

While some aspects of the movie are predictable, much of it is not.

It is filled with plot twists, double crosses and greed, which leads to the ultimate finale.

Unfortunately, for “Triple 9” some of the members of the all-star cast do not deliver their best performances.

Although no one can question the ability of Ejiofor, moviegoers will know from the jump that this is not his best performance.

All of his performances, including “Triple 9” are outstanding, but this one is not the most outstanding.

Furthermore, it is hard to see Paul as any character other than Jesse Pinkman on the hit TV series “Breaking Bad.”

And although Michael K. Williams (“The Wire”) is no stranger to gender-bending roles, his character Sweet Pea is possibly the ugliest female character in the history of American cinema.

Woody Harrelson’s country Atlanta accent leaves much to be desired as well.

Nevertheless, a unique and suspenseful story does not need Oscar-worthy performances to succeed on the big screen.

All that is needed is a unique twist to a popular genre, mixed in with some streetwise lingo and moviegoers get another street classic to add to the history books.