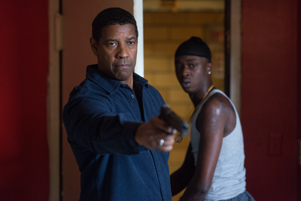 More Fire than the First

Understandably, film franchises do not seem important when you get to play such important real-life figures as Malcolm X, Steven Biko, Rubin Carter and Melvin B. Tolson on the big screen. In his case, making sequels should take a backseat.

However, when Washington finally joined a franchise with filmmaker Antoine Fuqua’s “The Equalizer” and “The Equalizer 2” he found a franchise in which the sequel is more fire than the original and the prospects for continued franchise success seems endless.

Robert McCall (Washington) worked for a special government agency of assassins back in the day.

He faked his death years ago and has attempted to live a carefree life in Boston.

In the original film, he worked at a hardware store.

The sequel has McCall working as a driver for Lyft.

Although he wanted a carefree life, especially after his wife died, when thugs abuse several people close to him in the original film, McCall has to go back to his old assassin ways to get some big payback, as James Brown would say.

After getting some payback 0r get back, McCall’s reputation soars towards the end of the original film and he begins getting email inquiries seeking help from people who cannot find help in the usual legal manner.

“The Equalizer 2” begins with McCall on a train to Turkey trying to find a kidnapped child.

He gets some payback in usual fashion.

He surveys the room for adversaries and potential weapons.

And then McCall destroys all of his foes by himself.

The list of 100 books was something that his wife embarked on before her death.

McCall’s wife never finished the list, so her widower vows to accomplish the task.

He is currently on the last book of the 100.

McCall continues his vigilante ways despite trying to become a normal Lyft driver.

However, when a tragedy in Brussels hits too close to home and his heart, he will find himself on a mission to kill people just as skilled at homicidal mayhem as he is.

“The Equalizer 2” is more than the equal of its predecessor because it is a little less brutal than the original, believe it or not.

However, do not get it twisted because the sequel is still beyond brutal and viciously violent.

Furthermore, “The Equalizer 2” contains a little more heart than the first installment of the franchise.

In the 2014 original, McCall has a soft spot for those close to him like his co-worker Ralphie (Johnny Skourtis) and the aspiring singer but current lady of the night, Teri (Chloe Grace Moretz).

But in the sequel, McCall takes an even more fatherly role in the life of Miles (Ashton Sanders, “Moonlight,”) a resident at the apartment complex in Boston where McCall resides.

Unfortunately, Miles is being lured by the activity that occurs on the neighborhood street corner and a Boston area gang.

Miles lost his brother to violence and all he has left is his mother.

He desperately wants to honor the memory of his brother in his artwork.

But, he more desperately wants to help his mother out financially.

And like many inner city children who struggle financially, a life of crime provides almost instant cash.

On the other hand, Sam Rubinstein (Orson Bean) got separated from his sister during World War II when they got placed in different concentration camps.

McCall drives him around from destination to destination and listens to his heart-wrenching stories about his lost sister and a painting that he thinks is of her.

Although he has loose ends to tie up throughout the movie, he still makes time to listen to the stories of a concentration camp survivor.

Furthermore, “The Equalizer” shows just how deep the friendship is between McCall and Susan (Melissa Leo) and her husband, Brian Plummer (Bill Pullman).

McCall and Susan seem to be the only people on Earth who have supported Brian’s scholarly book, although friendship and marriage is not enough to get them to actually read the book.

As McCall and Susan say friendship and marriage have limits.

“The Equalizer 2” shows just how far friendship will go and the sequel will distinguish real friends from real foes.

Washington is his usual stellar self.

The New York native has yet to deliver a subpar performance throughout his illustrious career.

He is simply one of the best actors of all time and is this generation’s Sidney Poitier.

With Washington’s two Academy Awards to Poitier's one, Poitier might actually be his generation’s Washington to be totally honest.

Pascal has in a way cornered the Hollywood market when it comes to playing certain roles and he continues to shine in all of his recent performances.

But the actor to watch out for is young Sanders who brings the correct amount of swagger, bravado, vulnerability and humor to his roles as Miles.

The young Miles even tells McCall that he has his back after McCall has everything under control in one particular scene.

Furthermore, Fuqua and Washington have the perfect chemistry as they have shown in this franchise and also in “Training Day,” which earned Washington the Best Actor Oscar.

The scene that Fuqua produced in a coastal town during a hurricane or tropical storm was beautiful, but deadly to quote a song from former Ruthless Records rapper, The D.O.C.

Both movies in the franchise are deadly and wickedly vicious and that might be to the dismay of some moviegoers.

The violence is so raw that moviegoers might have to turn their head in horror at times.

However, it movie buffs saw “The Equalizer” in 2014, they should know what to expect because the violence is par for the course.

And for those who have not seen the first installment, do not fret because it only takes a few minutes to get familiar with The Equalizer, Robert McCall.