Movie Review: Snow Proves She Can Hang With Pacino In ‘Hangman’ 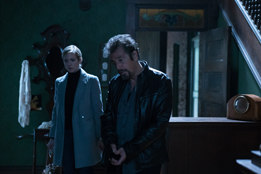 What Do You Expect?

That is the lead to the “Hangman” film review, plain and simple.

Pacino is like Denzel Washington in the fact that the veteran thespian does not deliver weak performances or appear in wack films.

Therefore, there are no superlatives needed to describe “Hangman” or Pacino’s performance in the film.

Fans already will know that it is good before walking into the theaters because of the star with the top billing.

Although the retired life is very peaceful and he has a decent pension, he never really left the police force.

Archer’s heart is still with the police department after dedicating so many years of his life to protecting and serving.

His colleague and friend, Detective Ruiney (Karl Urban) is still putting in major work at the police department though even as he struggles to come to grips with his wife, Jessica’s heinous murder.

It can be assumed that Jess’ murder is what keeps him motivated and keeps him fighting to remove criminals from the street despite the danger of the job.

Although work is business as usual for Ruiney, his work life gets thrown a curveball when Pulitzer Prize nominated journalist, Christi Davies (Brittney Snow, “American Dreams”) gets the assignment of tagging along with Ruiney on his investigations for a story that she is working on.

Christi is passionate about covering police officers because she wants to shed light on the controversy surrounding the relations between cops and civilians.

The esteemed journalist also has a love for cops that comes from past personal experiences.

Immediately after Ruiney reluctantly agrees to allow Christi to accompany him on his investigations, a young woman named Carrie is found murdered, hanging from her neck at a local elementary school where she worked.

It is soon discovered that Carrie was killed by asphyxiation and left hanging after she was killed.

When more dead bodies are found hanging in Monroe, Ruiney and the unretired Archer know that they have a serial killer on their hands.

If the two detectives do not find out who is committing these murders and why, the entire town of Monroe is in danger of the hangman.

And while the award-winning journalist is initially seen as a nuisance, her investigative journalism skills prove up to par with her counterparts in law enforcement.

When trying to capture a serial killer, it is never if the killer is going to murder again, it is when, why and where they are going to kill again.

There is usually some reason why serial killers become so sadistic and a reason why they choose their murder victims.

In “Hangman,” it is up to Archer, Ruiney and Christi to figure out the hangman’s pattern before more lives are ruined.

As to be expected, the Academy Award winner, Pacino delivers a stellar performance.

The only thing negative that can be said about any 0f Pacino’s performance is that he does have an acting style that is predictable and sounds alike.

He is kind of like a fabulous musician that has a certain style in which all of their songs sound similar, but that does not diminish their greatness.

And although many young actors might be scared to go toe-to-toe with a legend like Pacino, Snow holds her own and proves that she has come a long way from her squeaky clean role as Meg Pryor in “American Dreams.”

However, the reason to see “Hangman” is because of Pacino.

Watching him is always like watching greatness and “Hangman” is another good performance for the legend.