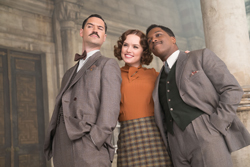 What is a murder investigation to a seasoned detective?

A good detective can figure out a criminal case in their sleep.

In a murder case, the detective just needs to find motive, a murder weapon and eventually a suspect for the crime.

However, what if everyone has a motive to kill the murder victim?

What if everyone has the opportunity to kill the victim?

What if everyone is a suspect?

In “Murder on the Orient Express,” everyone is an actual suspect in the murder of Edward Ratchett (Johnny Depp).

Ratchett has made a few enemies by selling counterfeit artwork to some unsavory characters that desperately seek revenge for being duped into buying bootleg artwork.

The crooked art dealer knows that people want him dead and if Poirot can protect him, he might be able to escape a certain death.

However, when Poirot refuses Ratchett’s offer, the marked man ends up dead on the train.

The manager of the train enlists Poirot to determine who Ratchett’s killer is before the train reaches its ultimate destination.

In “Murder on the Orient Express,” it almost immediately becomes obvious that everyone is not who they appear to be.

Although the train is full of Europe’s elite, from royalty to doctors to professors, everyone has a secret that they are hiding, which puts them all in harms way.

Even Ratchett has more problems than he lets Poirot know of, which puts his life in even more danger than it is because of the bootleg artwork.

Detectives like Poirot are accustomed to suspects lying to them.

But when everyone is a competent liar, it makes an expert detective look less than competent to bring justice for the murder victim on the Orient Express.

The 2017 version of “Murder on the Orient Express” is a stylish and mysterious adrenaline rush, which will keep audiences on their toes and guessing throughout the two-hour movie.

The train is elegant.

The passengers are regal and wealthy.

The snow-capped mountains of Europe are gorgeous.

The clothing that the passengers wear is exquisite.

And the film does not fall into the formulaic pattern of predictable Hollywood storylines.

Without comparing it to other versions of “Murder on the Orient Express,” the 2017 version is not predictable in the least bit.

Just when audiences think they know who the killer is, a new detail is revealed that completely throws that hypothesis out of the train window.

Furthermore, the casting in “Murder on the Orient Express” is superb from Josh Gad, Penelope Cruz, Leslie Odom, Jr. and Dame Judi Dench.

Dench is perfectly snobbish and elitist as Princess Dragomiroff.

Additionally, Odom is sophisticated and brilliant as Dr. Arbuthnot.

But ultimately, it is the entire suspicious cast of “Murder on the Orient Express” that deliver killer performances amidst the perfect backdrop to capture the life of the elite in 1930s Europe.

This film ultimately answers the question, what is a good and unpredictable murder mystery?