Movie Review: ‘Money Monster’ Will Have One Question Who Real Monsters Are 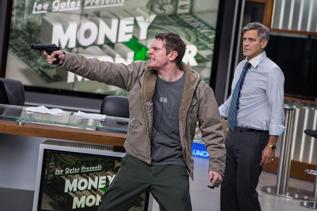 The type of story behind “Money Monster” has appeared on the screen before.

On the sitcom “Martin,” Big Red (Hawthorne James) from “The Five Heartbeats” held Martin Lawrence’s talk show “Word on the Street” hostage with a bomb and a grenade until Cole (Carl Anthony Payne II) found Big Red’s old lady (Shirley Hemphill) and got her back to him.

But while there is comedy in “Money Monster,” the real life stress that can cause a person to snap in life is treated with so much empathy and understanding that one feels just as bad for the kidnapper as the hostages.

He guarantees success with his stock tips and does it with an unusual swagger, which includes bad dance moves and a couple of Fly Girl dancers like “In Living Color” back in the day.

However, the only guarantee in regards to Lee is that he only cares about himself and not his legion of fans or the women in his life, inappropriately flirting with all of the women on the crew of “Money Monster.”

But when Kyle Budwell (Jack O’Connell) takes his advice to heart and puts his life savings of $60,000 into stock for the company IBIS, he is devastated when the stock loses $800 million in one day.

Lee had informed his viewers that their money was safer with IBIS than in a savings account.

Unfortunately, a glitch in IBIS’ algorithm leads to the crash of that stock and ultimately a crash for Lee’s future.

To make matters worse, Kyle just buried his mother six months earlier and put all of his inheritance into IBIS in order to provide a financially secure future for his family.

During a taping of the show “Money Monster,” Kyle somehow manages to make it past security onto the studio floor during the live taping.

He has a gun in one hand, and a detonator to a bomb in the other.

Kyle forces Lee to put the bomb on as a vest and allow him to air his grievances to a national television audience.

The troubled young man wants answers as to how IBIS could lose all of his money and nobody is held accountable.

If Kyle does not get what he wants, he has no trouble ending his live and everyone at the FNN television studio on live broadcast television.

That is because in life good and bad depends on the situation and everybody has buttons that can be pushed that forces them over the edge.

Kyle only wants to do right for his family.

To society, he is probably invisible and “unsuccessful” because he only makes $14 an hour and can barely feed his family.

He is still grieving the loss of his mother and he has to live with the fact that he lost her life’s savings because he took stock advice from someone admired enough to have his own show on making money.

When “regular” people like Kyle lose everything, the people responsible sometimes end up getting rewarded for their bad business dealings.

The pain in O’Connell’s face throughout the film is palpable.

Clooney does his usual solid work but he should never dance on or off camera again in life.

His acting is good.  His dancing, however, is atrocious.

However, the star is O’Connell.

Although this story has been told on screen before, moviegoers get to feel Kyle’s pain in a way that does not condone his actions.

But it makes people feel and understand his pain and hope for the best outcome for his future.