Movie Review: ‘Den of Thieves’ Pays Homage To Predecessors With Own Unique Twists 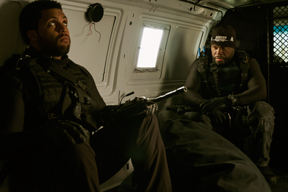 The Best of the Rest with Unique Twist

Why would anyone steal an empty armored truck?

Furthermore, why would anyone use deadly force to knowingly steal an empty armored truck?

The answers are that successful criminals are more clever and smarter than the average thief.

True criminal masterminds study their craft and succeed in their capers.

The Outlaw crew in “Den of Thieves” knows that they are on law enforcement’s radar. But they are brazen and intelligent enough to still pull off their crimes without being caught.

“Den of Thieves” describes Los Angeles as the bank robbery capital of the world.

That distinction seems obvious with the amount of bank robbery movies that take place in Los Angeles from “Takers” to “Set it Off.”

When bank robberies occur in the city, people like Nick Flanagan (Gerard Butler), from an elite unit of the L.A. County’s Sheriff’s Department, start with the usual suspects like Merrimen (Pablo Schreiber).

Very few have the guts to pull off a deadly armored truck heist. But Merrimen is definitely one of them and he has just recently been released from prison.

Nick and his crew, known as the Regulators, are tasked with finding out if Merrimen had anything to do with the heist of the armored truck, and who all are a part of his criminal crew.

When Nick kidnaps Merrimen’s driver, Donnie (O’Shea Jackson, Jr., “Straight Outta Compton”), he forces the driver to collaborate with the sheriff’s department or risk going back to jail for many years.

Although Donnie is just a driver, he is able to provide crucial information about the Outlaws next bank robbery.

The Outlaws plan to rob the Federal Reserve even though no one has ever successfully robbed the bank.

As a matter of fact, no crew has ever made it past the first level of security checks inside the Federal Reserve let alone gotten away with any stolen cash.

Merrimen informs his crew, which also consists of Bosco (Evan Jones), Levi (Curtis “50 Cent” Jackson) and Mack (Cooper Andrews), that the Federal Reserve marks all of its cash with a serial number so that they will know if any bill comes up missing.

However, the Federal Reserve does destroy bad bills, which are not intended to make it to the streets.

If the Outlaws can get to the cash that the Federal Reserve intends to destroy, they can get away with millions of dollars that no one will ever miss.

“Den of Thieves” wisely takes elements of other heist and gangster films like “The Drop,” “Italian Job” and “The Town,” but puts its own clever twists into the storyline with unexpected turns that come out of left field.

The film also takes elements from “Bad Boys 2” when Levi confronts his daughter’s prom date with some subtle threats of violence if the date is not on his best behavior.

Furthermore, “Den of Thieves” allows characters like Nick to develop from just being a hard-nosed cop to a divorcee with a heart.

Additionally, “Den of Thieves” accurately portrays law enforcement in the sense that sometimes those charged with upholding the law, bend the law a little bit to get the results that they desire.

“Den of Thieves” will actually have moviegoers cheering for the bad guys instead of the good guys.

And just when moviegoers think “Den of Thieves” is a typical predictable Hollywood production, the unpredictable happens.

If potential moviegoers ask why should they go to see another bank robbery movie, then the unpredictability of “Den of Thieves” and the homage the movie pays to its predecessors are the reasons why.