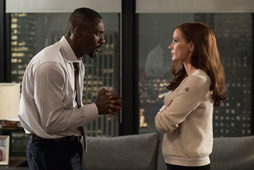 People act the way they act for a reason.

Jerks are not jerks for no reason.

The decisions people make are not by chance.

Many things that adults do can often be traced back to childhood.

Unfortunately, some decisions that adults make because of their turbulent childhoods have grown up consequences.

And the game that Molly Bloom plays in “Molly’s Game” eventually leads to her playing herself.

Even though she has a back injury, which will prevent her from competitive skiing, her father insists that she keeps on skiing and she eventually makes it to the Olympic Trials.

She is a potential Olympian.

Furthermore, she is brilliant in the classroom, earning admission to Harvard University School of Law.

To put it bluntly, Molly has her entire life mapped out.

However, a wise man or woman once said if you want to make God laugh, tell Him your plans.

Molly’s ends up suffering a catastrophic injury on the slopes, and decides to put off law school for a year and just live a normal life with a friend in Los Angeles.

A waitress job eventually leads to an office job working for a flashy entrepreneur.

Her work in her office job leads to her helping her boss in his illegal poker games, which have a buy in of $10,000 and features some of Hollywood’s biggest high rollers.

Although she is a novice to poker, Molly begins making more money than she could have ever imagined and continues to forego law school for the lucrative business of underground gambling.

Unfortunately in “Molly’s Game,” the titular character might find herself in the loss column after the game is over.

“Molly’s Game” is one of those magnificent movies that has a little bit for everyone.

Chastain has mastered the jerk effect that most brilliant people have over the less brilliant.

Many geniuses walk around with an air of superiority and invincibility that mere mortals cannot relate to.

That arrogance is often a turn-off for other people around them, but if people understood what made people turn into jerks, the haters might be a little more empathetic.

As a lawyer who sometimes knows less than his client, Elba has to grow to respect a client who turns off so many would-be allies.

Unfortunately, the most respectable character trait that she possesses might be her ultimate downfall unless Charlie can convince to change her outlook on her predicament.

Despite the greatness of “Molly’s Game,” poker novices might have a hard time following the game and the poker jargon.

But even if one is not a poker expert or a movie expert, moviegoers will recognize a magnificent film when they see it.

And at the same time, moviegoers might witness a jerk turn into a sympathetic figure when the psychology behind her behavior is truly explained.