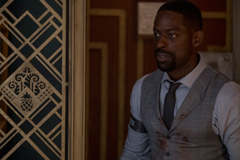 Just when movie critics felt like Hollywood did not get it with its formulaic movies and insistence on remaking classic films of yesteryear, Hollywood gives moviegoers something unique with “Hotel Artemis.”

Finally, an original thought from people paid to think outside of the box with their creativity.

With “Hotel Artemis,” movie buffs will get a film with a theme never before touched upon with A-list talent taking the film to the next level.

Have you ever wondered where criminals go to seek medical attention when their crimes go awry?

In the movie “Public Enemies,” John Dillinger (Johnny Depp) went to certain safe houses throughout the country where the bank robber had medical staff on stand by to stich up his wounds and give him refuge for the time being.

However, in the year 2028, the criminals in Los Angeles have taken safe houses to the next level in “Hotel Artemis.”

As a famous rapper once said, there are levels to this.

In the film “Hotel Artemis,” the infamous hotel gives criminals refuge from law enforcement officials and the dangers of a rioting La La Land.

“Hotel Artemis” begins as the citizens of Los Angeles find themselves embroiled in a heated uprising.

The city has privatized water, meaning that residents do not just have regular water pumping into their homes, but they have to pay exorbitant prices for the most basic necessity of life.

With no water, there is basically no human life and the Los Angeles rioters break into a fight for their livelihood.

Rioters have taken over much of the city.

Even the police officers find themselves in danger.

Most regular citizens do not have a hiding place from the insanity in the streets, but criminals are not most people.

Honestly, all criminals are not Artemis criminals, meaning they do not have the protection that membership at Hotel Artemis brings.

While Los Angeles residents fight for their dignity in the streets, a criminal organization led by brothers Waikiki (Sterling K. Brown) and Honolulu (Brian Tyree Henry) see an opportunity for a big money scheme.

Many of the poor residents of Los Angeles work for the millionaires and the billionaires of the city.

Although the rich and elite are probably insulated from the dangers of the riot, their worldly and valuable possessions still would be better in a safer place than their luxurious and palatial estates.

Therefore, the bourgeoisie of the city send their maids and groundskeepers to the bank to store their valuables in the safe.

Waikiki, Honolulu and the crew decide to meet the help at the bank and help themselves to those valuables.

However, when the caper runs into trouble, the group has to run to Hotel Artemis to get medical attention from The Nurse (Jodie Foster) and to seek safety and security from the rioters.

What sets the hotel apart are rules.

Just like in the streets, there are codes to live by at Hotel Artemis.

The rules are there to limit the damage done by a life of crime.

In order to get into the hotel, criminals have to apply for membership and pay dues.

If a criminal is not a member, they are not allowed inside the hotel even if they are friends with a member.

Also, absolutely no police officers are allowed in the hotel at anytime whatsoever.

While The Nurse usually sticks to the rules no questions asked, a potential guest makes her second guess her own rules, which can put all of the legitimate guests at risk.

And after The Wolf King (Jeff Goldblum) has to go to visit The Nurse, all hell might break loose at Hotel Artemis.

First of all “Hotel Artemis” is a weird movie, but that’s not a bad thing anymore for Hollywood if done correctly.

The movie industry has existed for a century, so doing the normal thing on film has become monotonous.

Real creative talents like a Quentin Tarantino and others succeed because they think outside of the box and deliver stories in a way that moviegoers have never seen.

And like Tarantino, writer and director Drew Pearce succeeds in getting Oscar-type talent like Foster and Brown to shine in an offbeat film that many of their fans would not expect to see them in.

Brown and Foster are true thespians in every sense of the word.

And like many artists, true thespians like to break out of the box that critics have for them.

Brown has gotten much acclaim for playing real life people in “Marshall” and “American Crime Story.”

Likewise, Foster known for roles in films like Spike Lee’s “Inside Man” and “Flightplan” gets to play an anxiety filled nurse with a tragic secret that not even the regular guests at the hotel know about.

Unfortunately, The Nurse’s secrets might put everyone at the hotel in more risk than their criminal lifestyles put them in.

While “Hotel Artemis” is definitely not a film that can fit neatly into Hollywood’s existing boxes when it comes to themes and topics, it does find itself in the gory and viciously violent box.

The over the top and cringe-inducing violence might be too much for some moviegoers to handle.

However, seeing Brown with a little violent streak in him is worth the price of admission because fans have grown accustomed to seeing him as the good guy on the big and small screen.

Pearce’s script is excellent too.

In order to have a film with so much gore and sell it to the masses, good comedic timing is necessary.

Charlie Day delivers the right amount of comedy with his timid, but arrogant performance as Acapulco.

With so much violence in a film, sex appeal is also a much-needed ingredient to make the film easier to digest.

Sofia Boutella delivers with the sex appeal, and then some, with her performance as Nice.

However, Nice is not just a pretty face with a thin waist.

She can definitely pack a punch and hold her own in an environment filled with hardened criminals.

If moviegoers can handle extreme violence, then “Hotel Artemis” is a must-see because Hollywood has finally taken the restraints off of filmmakers and allowed true talent to think outside of the formulaic box.