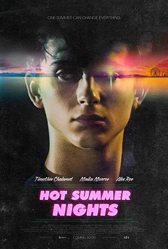 In the coming of age film “Hot Summer Nights,” Daniel (Timothee Chalamet, “Call Me By Your Name”) desperately tries to find his way in life after graduating high school.

The year is 1991, and while many of his peers simply want to have fun in the sun on Cape Cod, Mass., Daniel instead makes decisions that could affect his life and the lives of those around him forever.

“Hot Summer Nights” is a must-see movie that shows just how hot and hazy it can get in life when young people make temporary decisions that bring a lifetime of consequences.

The year 1991 remains a year to remember for many Americans.

America went to war in the Persian Gulf.

Rock star Freddie Mercury of the band Queen died of AIDS. On a side note, the upcoming Queen biopic “Bohemian Rhapsody” should be epic.

Earvin “Magic” Johnson announced his retirement from the Los Angeles Lakers because he had the HIV virus.

The year 1991 also holds a special place in the hearts of Smith family members.

My sister graduated from high school and went off to Southern University in Baton Rouge, La.

The grass was greener.

The sky was bluer.

The R&B music was better.

And hip-hop music was on another level than the mumble rappers of today.

But like my family and many other people, 1991 was an epic year for Daniel Middleton too in “Hot Summer Nights.”

Although he has graduated high school, he still is at a crossroads in his life.

Many adolescents overcome their awkward teenage years the moment they walk across the graduation stage in high school, but not Daniel.

His father has died.

He keeps to himself.

He has no job.

He does not hang with friends.

He just sits alone in his bedroom with his headphones listening to music, while trying like hell to ignore his mother who wants him to do something productive with his life.

In order to light the fire in Daniel’s belly, his mother sends him to his aunt’s house in the luxurious vacation town of Cape Cod to try to find himself in life and transition into a responsible adult.

Although Daniel tries to stay on the straight and narrow on Cape Cod by getting a job in a convenient store and frequenting the local drive-in movie theater like a lot of teenagers, his life becomes even darker after a chance encounter with the local bad boy while at work.

When Daniel plays it cool and the cops are unable to arrest Hunter, a respect and friendship develops between the local bad boy and the out of town visitor.

Not too fond of the name Daniel, Hunter rechristens his new friend, Danny because he believes the nickname sounds cooler than the more formal, Daniel.

In “Hot Summer Nights,” the friendship between Danny and Hunter takes a more business turn when Danny suggests that he go into business, selling marijuana for Hunter.

Danny believes that he can provide a better cover for the infamous Hunter.

All of the local police officers know that Hunter sells weed.

All of the townies know that Hunter sells weed.

And all of the vacationers know Hunter sells the best weed in town.

However, no one on Cape Code knows who Danny is.

One other person on Cape Cod knows who Danny is and that is the hottest girl in town, McKayla (Maika Monroe).

Although still in high school, legend has it that McKayla has all of the men in Massachusetts in love with her, including a football star at Boston College.

McKayla’s currently in a relationship, but that relationship is volatile to say the least.

When McKayla gets into a fight with her boyfriend at the local drive-in movie theater, she jumps into Danny’s car and asks him to take her own.

Immediately, an infatuation develops between the two teenagers despite McKayla’s current relationship status.

And after Danny builds more confidence as a result of his success as a drug dealer, he gets the nerve to kiss McKayla in front of her boyfriend.

Although the kiss leads to Danny getting knocked out, his bold move knocks McKayla off of her feet and the two become an item.

However, one problem still exists for the new couple.

McKayla is Hunter’s little sister and he is very protective of her because of all of the attention she receives from men with immoral motives.

And in “Hot Summer Nights,” rumor has it that Hunter once killed a man.

It would be such a shame if the same fate were in store for Hunter’s new best friend, Danny because of his choice in women.

“Hot Summer Nights” is an enjoyable film that is like a mix between “American Pie” and “Blow.”

In “Hot Summer Nights” Danny transforms from Jim in “American Pie” to George Jung in “Blow” in less than two hours and Chalamet is more than talented enough to pull off the extremely quick transformation.

Chalamet’s performance in “Hot Summer Nights” can be described as nerdy fly.

Danny is nerdy and awkward.

However, there is something cool in his “nerdiness,” because he makes it work for him.

Danny never tries to act tougher than he is.

He is just Danny.

Furthermore, the vintage 1990s graphics in “Hot Summer Nights” are a great blast from the past and perfectly appropriate.

“Hot Summer Nights” also has the right mixture of quirkiness, drama and  “straight gangstaism” (to quote the Geto Boys) to satisfy movie buffs of all kinds.

Regardless, 1991 was still a monumental year for many Americans and “Hot Summer Nights” captures that moment in time in a monumental way.