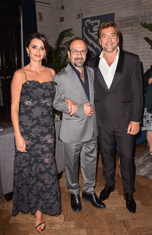 The movie “Everybody Knows” covers no new ground in the mystery and crime genres.

The movie centers on a teenager kidnapped by abductors hoping to score a huge ransom payout.

Moviegoers have seen the storyline many times before in thrillers like “Ransom” and “Taken” in addition to comedies like “Rush Hour.”

However, everybody knows that a movie starring heavyweight thespians like Penelope Cruz and Javier Bardem will have more than enough intrigue and action to standout in a crowded genre of movies.

In “Everybody Knows,” Spanish native Laura (Cruz, “Murder on the Orient Express”) has created a great life for herself in Argentina.

But despite the family’s success in Argentina, nothing can replace the comfort of extended family and home.

So when Laura, Irene and Diego travel back to Spain for a family wedding, the wedding becomes like a reunion for long lost family members and long lost friends.

Unfortunately, everybody knows when family gets together it can go either way.

The reunion can produce many great memories and laughs.

But the reunion can also create tension, jealousy and strife by bringing back old rivalries or creating new rivalries within families.

While in Spain for the family wedding, Irene becomes smitten with a local boy named Felipe (Sergio Castellanos) who is Paco’s (Bardem, “Mother!”) nephew and also a friend of the family.

They immediately fall for each other in “Everybody Knows.”

But everybody knows that summer romances or weekend teenage romantic flings often do not last long because of the long distance nature of the relationship or the lack of maturity of the young couple.

Irene, who has a rebellious spirit, encourages Felipe to return to Argentina with Irene and her family.

Unfortunately, Felipe informs Irene that his mother will never allow him to leave Spain to go to Argentina.

Therefore, Irene tries to encourage Felipe to sneak away from his family and run off to Argentina in the name of love.

The tension surrounding “Everybody Knows” is because everybody in the Madrid community knows where the wedding takes place and how much of a positive impact that Laura and Alejandro have had financially in the community even though they live miles away in Argentina.

When the church in which the wedding takes place fell on hard times financially, Alejandro and Laura came to the rescue.

The priest even makes mention of Alejandro’s financial contribution during the wedding services after the church bell tower begins to ring uncontrollably.

What the priest and the parishioners do not know is that the church bell begins ringing because of the flirtatious shenanigans of Irene and Felipe who have snuck off from the wedding ceremony to enjoy some alone time.

While in the church bell tower, Felipe informs Irene that her mother Laura had a long romantic relationship with his uncle, Paco.

Felipe tells Irene that everybody knows about their love affair, even though both have married other people and moved on with their lives.

Although Paco grew up in the same house as Laura working as a servant for her family, he has made a good life for himself as a farmer and vineyard owner.

Laura even sold Paco the land back in the day for his farm at an affordable price.

Nevertheless, everybody knows that Laura and Alejandro have their enemies because of their perceived wealth.

But with the wedding ceremonies going so well, no one pays attention to anything weird happening in their village in Madrid the night of the nuptials.

After Felipe persuades the underage Irene to have a cigarette and some wine at the wedding reception, the teenager immediately falls ill.

Laura escorts Irene to a bedroom in her grandfather’s house to let her sleep off her illness while the other relatives and family friends continue to party the night away.

The family later finds out that someone cut an electrical cable to force a power outage in the Madrid neighborhood.

While Paco goes looking for a generator so they can keep the party going like comedian D.L. Hughley once said in “The Original Kings of Comedy,” Laura goes upstairs to check on her sicken daughter.

However, Laura instead finds an empty bed and a locked bathroom with no one answering her knocks on the bathroom door.

When Paco returns and knocks the door in, the family discovers the gruesome news.

Although the family should have no problems getting the money to the abductors, the family has been living a life of lies for years, although nobody knew, and those lies finally catch up with them in “Everybody Knows.”

Even though “Everybody Knows” is entirely in Spanish, reading the subtitles does not take anything away from the drama and raw emotion that oozes out of Cruz and Bardem.

The film could have been a classic silent movie and moviegoers would understand and empathize with the pain of a mother not knowing where her child is.

However, with many foreign language films like “Everybody Knows,” multiple viewings of the film might be necessary because reading subtitles might cause the moviegoers to miss out on some of the nuances and the body language and facial expressions of the actors.

Despite the film featuring acting veterans like Cruz and Bardem, the two teenage star struck lovers played by Campra and Castellanos, almost steal the show from their more experienced counterparts in “Everybody Knows.”

But unfortunately for “Everybody Knows,” everybody does know how these type of films end.

Kidnapping movies either end one of two ways.

But what separates “Everybody Knows,” are the lies that not everyone knows about, which could all contribute to Irene’s abduction.

Nonetheless, filmmaker Asghar Farhadi left some questions unanswered with the abrupt conclusion of “Everybody Knows” leaving no one actually knowing the true consequences of Irene’s kidnapping.