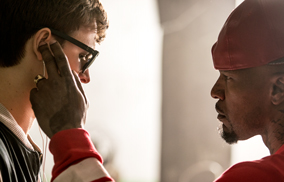 With that much star power, “Baby Driver” cannot help but drive all the way to the top of the box office.

But with all of that talent and all of those award-winning actors, it’s the “baby” actor, Ansel Elgort, who completely steals the show in “Baby Driver.”

Baby, along with a rotating crew of bank robbers, work for Doc (Spacey) to orchestrate some monumental heists in the Greater Atlanta area in “Baby Driver.”

Although the robbers change, Baby remains the driver.

The soundtrack playing on his many iPods aids his cool and calm demeanor.

While the stakes are high, Baby remains the calming presence and the speed needed to avoid capture by the authorities.

Although his comrades think he’s slow because he does not speak much and only listens to music, without him the heists would be impossible and that’s why Doc keeps him around for every caper.

However when Baby meets “bae,” also known as the waitress Debora (Lily James), the talented getaway driver has second thoughts about continuing a life of crime.

Although he has had loved-ones in his life throughout, his life seems to gain purpose when he falls in love with a girl who has the same love of music and desire to hit the road as he has.

Unfortunately, once someone is in a life of crime it is extremely vexing to get out of that lifestyle.

The movie “Baby Driver” is a well acted, cleverly written adrenaline rush from the beginning to end.

Baby is so eclectic and weird that it is likable.

The lead character, played brilliantly by Elgort, is old school in a new school way.

But instead of bumping artists like Migos like people in his age group, Baby’s musical amigos are the soulful singers of the 1960s and earlier.

Although “Baby Driver” is remarkable and unique in many ways, Spacey’s character Doc is a little too similar to his character Micky in “21.”

Like in “21”, Doc is the mastermind behind his illegal business, but he uses other criminals to be the face of the organization.

Doc conducts tutorials before every heist and chastises his crew’s bad behavior just like Micky did in “21.”

Foxx is an Oscar winner, so no one is surprised with another stellar performance by the Terrell, Texas native.

And despite the heavy hitters like Foxx, Spacey and Bernthal, it is Elgort who outshines all of his more experienced brethren.

And with a name like Baby, he fits right in with his co-conspirators like Darling (Eiza Gonzalez) and Buddy (Hamm).

Elgort who gained his fame from roles in the “Divergent” series has superstardom written all over his face with upcoming roles in “Dungeons and Dragons” and “Billionaire Boys Club.”

It will not be long before his name is as recognized as his co-stars.