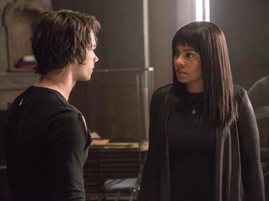 One can probably get away with saying most Americans hate terrorism.

Many join the military to fight for the country, while others make it their mission to support the troops who sacrifice so much for fellow Americans.

But what would it take for one to single-handedly want to take down the enemies of this great country?

For Mitch Rapp (Dylan O’Brien, “The Internship”) in “American Assassin,” the hatred for the enemy intensified after the assassination of his fiancé Katrina (Charlotte Vega) and countless innocent victims on a pristine and exotic beach.

At the beginning of “American Assassin,” Mitch should be enjoying the best day of his life.

He’s on a honeymoon-like vacation with the love of his life.

He proposes with his mother’s old engagement ring and his soul mate says yes to his hand in marriage.

However, before Mitch and Katrina can celebrate on the beach with drinks, a gang of terroristic assassins invades the beach, killing anyone that crosses their path.

Mitch is able to survive his gunshot wounds, but he cannot make it from the bar to the water in time to save his beloved Katrina.

Instead of mourning his loss with tears and alcohol or drugs, Mitch’s drug is vengeance against the terrorists.

Mitch trains in military assault rifles, pistols and mix martial arts to prepare for the day that he sees his enemy face to face.

The vigilante learns Islam and Arabic and begins communicating with Muslim terrorists via the dark web.

Mitch plans a trip of retribution to Libya to take matters into his own hands.

However, he is unaware of the fact that the CIA and its boss lady Irene Kennedy (Sanaa Lathan, “The Best Man Holiday”) have been monitoring his every move.

Hurley’s group has been tasked with locating uranium-enriched plutonium that has gone missing from Russia.

If the plutonium gets into the wrong hands, it could produce a nuclear weapon.

And a nuclear weapon could spell catastrophe for America and the rest of the world.

“American Assassin” is an awesome and intense adrenaline rush.

The film “American Assassin” has all of the necessary ingredients for a successful guy film from the violence and fighting to the current events of the day.

The nuclear explosion in the film would be breathtaking if it were not such a realistic probability in current times.

“American Assassin” also possibly contains some true feelings, such as some Iranians’ disappointment with the nuclear treaty signed with the United States.

Furthermore, to see Lathan in such a powerful role is refreshing.

Unfortunately for the film, Mitch’s transformation from a loving, seemingly nonviolent newly engaged 23-year-old to a cold-blooded assassin seems a little far-fetched, even though the transformation is explained in the film.

Nevertheless, “American Assassin” sums up the feelings of many Americans fed up with the insanity of terrorism.

Sometimes, people feel like taking on evil by themselves, regardless of the danger, consequences and constraints.