Movie Review: ‘Selah and the Spades’ Does Not Rise Past Mediocrity 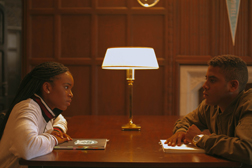 “Mom, I made a 93 on my calculus test,” to paraphrase Selah Summers (Lovie Simone, “Greenleaf”) in “Selah and the Spades.”

To which Selah’s mother responds, “What happened to the other seven points?”

Unreasonable expectations have caused many teenagers to act out in school and in life to protest the pressure placed upon them by their parents.

In “Selah and the Spades,” Selah is no different than the stereotypical teenager who comes from a home in which getting a “B” might result in getting a beat down.

While some overachieving students might sulk or cry about not getting an “A” and realizing that they will face chastisement at home, Selah responds differently.

Selah rebels against her overbearing mother by acting out, which includes bullying at her private boarding school and selling illegal drugs to her fellow classmates.

In “Selah and the Spades,” the students at Haldwell School appear not much different than high school students across the globe to an extent.

Either you are popular or you are nobody.

In a typical public high school, you have the jocks, the nerds, the pretty girls like the cheerleaders and the social misfits.

But in a stereotypical public high school, a person usually can fit into multiple categories simultaneously.

For example, a student can be a nerdy jock or a nerdy pretty girl.

In that case, the student has good grades but they also have other talents or qualities.

However, in “Selah and the Spades,” the students at Haldwell School have taken the idea of high school cliques to that other level of the game.

Furthermore, those factions have names.

Most importantly, a student might get along with a student from another faction and even do business with them, but once a person belongs to a faction it is like belonging to a college fraternity or sorority.

Membership is for life.

In “Selah and the Spades,” Selah is the unquestioned leader of the faction The Spades, as the title of the film suggests.

The thing about a faction and a regular high school clique is the factions at the Haldwell School control the underground activities of the students.

For instance, the Spades control the purchasing and distribution of illegal drugs to the stoned students at Haldwell from Adderall to other narcotics.

The problem with privileged private school kids trying to participate in illicit businesses is that they usually do not have any street credibility.

Selah’s best friend and Spades comrade Maxxie (Jharrel Jerome, “Moonlight”) writes down all of the drug purchases in a ledger.

For those with no street sense, leaving a paper trail is never a good thing when it comes to illegal and felonious capers.

In the classic Spike Lee joint “Malcolm X,” West Indian Archie (Delroy Lindo) told a young Malcolm Little or “Detroit Red” (Denzel Washington) if the man has no paper, he has no proof.

In “Selah and the Spades,” if Maxxie gets caught the man will have a whole book full of paper that would incriminate the entire faction and many other members of the student body.

And rumor has it that the Spades have a snitch in the clique who can expose Selah, Maxxie and the entire drug operation.

But who could the snitch be that could topple the Spades’ reign?

Is it the new transfer to the school, Paloma (Celeste O’Connor)?

No one really knows the new girl.

However, Selah takes Paloma under her wings even though she is just a sophomore.

Paloma becomes a Spade because Selah likes hanging out with her and likes her skills as a photographer.

Selah even uses Paloma’s photography skills to help blackmail her enemies at Haldwell.

But Paloma is an underclassman and students have to be seniors to belong to a faction.

Is the snitch Maxxie who begins associating with a girl not affiliated with the Spades?

Or is it one of the students that the Spades bully by jumping them and throwing them down the north stairwell at the school?

When a person or a group has a lot of enemies, it becomes difficult to discern the culprit.

Or is it one of the leaders of the other four factions?

After all, the Bobbies have long had beef with Selah and the Spades.

One thing is for sure; Selah cannot play the nice girl when it comes to determining who her real enemy truly is.

“Selah and the Spades” does not have anything special about it.

But at least it has Simone, Jerome and Jesse Williams who stars as the school Headmaster in “Selah and the Spades.”

Simone is perfect as the spunky, sarcastic and rebellious teenager.

The young actress has mastered that role with the OWN series “Greenleaf,” and that mastery carries over to “Selah and the Spades.”

And although Jerome is one of the best young dramatic actors to come around in recent years as seen in the Netflix limited series “When They See Us,” his role in “Selah and the Spades” allows him to take himself less seriously.

But while Simone has more supportive parents in “Greenleaf,” her rebellion in “Selah and the Spades” shows the damage that can be done when parents put too much pressure on their children at a time when they should be enjoying their childhood.

Unfortunately, that moral lesson is not enough of a lesson for “Selah and the Spades” to earn a good mark.

The movie “Selah and the Spades” is available for streaming on Prime Video on April 17.