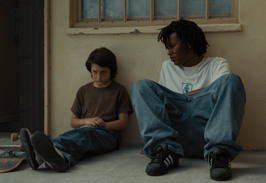 Actor/filmmaker Jonah Hill could rename “Mid 90s,” the “Mid2000s,” the “Mid80s” or the “Mid70s” because the cautionary tale about abuse, acceptance and alcoholism during adolescence has a universal and timeless message that every teenager and parent should heed.

In “Mid90s,” Stevie (Sunny Suljic) has the chips stacked against him from Jump Street.

His mother gave birth to his older brother Ian (Lucas Hedges) at the tender age of 18.

Instead of enjoying high school parties, prom and homecoming, Stevie and Ian’s mother had to nurse an infant son and deal with adult responsibilities long before she truly entered adulthood.

The young family struggles to make ends meet and the children struggle to find any stability in their rough environment and dysfunctional home.

“Mid90s” begins with Ian physically abusing his baby brother as a means of venting his frustration.

He hates his life.

He hates his mother.

And he hates his little brother, Stevie.

However, he only gets rejection and retribution from Ian for such minor infractions as going into Ian’s room when his older brother is not around.

Although Ian warns Stevie to stay out of his room, that is like welcoming his brother into his room with open arms because little brothers often do the exact opposite of what their older siblings tell them to do.

When Stevie does find his way into his Ian’s room, he finds a whole new world.

Despite his lack of love for his brother and mother, Ian has a love for hip-hop music, culture and fashion.

And compact discs, yes CDs because the movie is called “Mid90s” after all, fill the room with classics from such artists as Geto Boys, Mobb Deep and Wu-Tang Clan.

Stevie loves Ian so much that he scrapes a few dollars together to get Ian a CD that he does not have for his birthday.

Unfortunately, Ian discards the gift in the same manner that he discards his relationship with his little brother.

They give him the new moniker, “Sunburn.”

And they teach him the nuances of the skateboarding scene.

Unfortunately, the crew also teaches Stevie about the drug scene, the alcohol scene and the sex scene at much too young of an age.

Thanks to his new comrades, Stevie finally finds the love, appreciation and acceptance that he cannot get from his older brother, but at what cost?

F**ks**t is a lot older than Stevie, but he is definitely not wiser.

Ruben is not much older than Stevie, so he cannot give him wise counsel because he is not old enough to have attained any real wisdom.

All he does is film his friends with his camcorder because he dreams of being the next Steven Spielberg.

But like his nickname Fourth Grade suggests, he is not the brightest bulb in the box.

The only person in the skateboard crew worth listening to is Ray.

He has experienced real life tragedies, but will his wisdom get drowned out by all of the ignorance from the rest of the crewmembers?

Who Stevie listens to and who he does not listen to will have a significant impact on his maturation process in “Mid90s.”

With “Mid90s,” Hill brilliantly captures the awkward teenage years filled with uncertainty, doubt, peer pressure and curiosity, which will make the film a must-see for generations to come.

The problem that adolescents have is lack of a broad view of life.

Many think that their parents do not understand them.

Many think that their parents do not know what it is like being a teenager during their era.

Many think their family is the only family on Earth that has problems.

However, if many children realize that the awkwardness they feel is normal, commonplace and brief it will drastically alter their view of life, in the process changing their future significantly.

Furthermore, “Mid90s” might scare the hell out of parents when they think about the alcohol abuse, drug abuse and promiscuity that have always been prevalent amongst teenagers.

Therefore, “Mid90s” is a cautionary tale for parents, and all adults as well.

“Mid90s” wins because of its honesty, rawness and realness.

By using non-seasoned actors in “Mid90s,” Hill is able to capture real life from the perspective of real people, not out-of-touch and wealthy celebrities.

Additionally, “Mid90s” benefits from the best decade of music featuring hits like “Passin’ Me By” by The Pharcyde and many other classics.

But although “Mid90s” is splendid and necessary, the use of the N-word by a non-Black writer and director comes across as excessive.

Hill uses the N-word more than some Black screenwriters.

With “Mid90s,” the talented actor challenges filmmaker Quentin Tarantino for White directors who excessively use the N-word in their films.

Nevertheless, the N-word usage during the 1990s was excessive.

During the 1990s, some White people got extremely comfortable using the N-word thanks to hip-hop music.

But “Mid90s” is not about the use of racial slurs, and who can and cannot use certain words.

Hill’s film is a coming of age story about young people navigating the harsh realities of life without proper guidance and horrible role models.

That subject might make Hill’s “Mid90s” a classic that never goes out of style because life’s struggles never go out of style, unfortunately.