Movie Review: ‘X-Men: Days of Future Past’ Shows No End in Sight 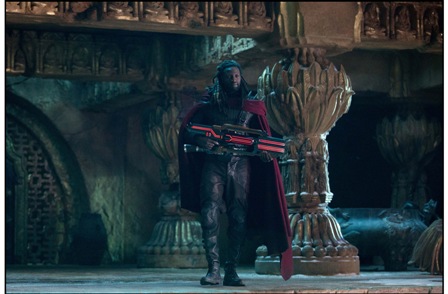 Bishop (Omar Sy) prepares for an epic battle that will determine the fate of mutants around the world (Photo Credit: Alan Markfield/20th Century Fox).

Human beings have always feared what is different.

Whether it is different skin color, different religious beliefs or a different point-of-view, those that question the status quo are often viewed as a threat that has to be quieted or destroyed.

The mutants in “X-Men: Days of Future Past” are at a crossroads in their existence.

Dr. Boliver Trask (Peter Dinklage) has created the Sentinel program, which consists of robots that can defeat any mutant and combat all of their powers.

The robots are also a threat to human beings because they are able to detect which humans have the mutant gene, eliminating them and the chance for them to spread the gene to their offspring.

Furthermore, the humans are a threat to the Sentinel program because many of them sympathized with the plight of the mutants and joined their cause, making them the enemy of Trask and his evil creations.

Raven (Jennifer Lawrence), under the wicked guidance of Erik (Michael Fassbender), has decided to murder Trask, which will result in the untimely demise of Raven if the Wolverine (Hugh Jackman) cannot travel back in time and convince her not to murder him.

If she dies at the hands of Trask or is captured, he will have all of her DNA, which will make it virtually a guarantee that he could eliminate all of the mutants from the planet.

The Wolverine travels back to 1973 to try to reverse the course of history, but is initially given a history lesson from waterbeds to lava lamps to transistor radios.

The Wolverine must overcome episodes of “Sanford and Son,” and only three television networks (excluding PBS) before he can overcome his biggest challenge in decades, which is to alter history forever and save the mutants from extinction.

There is little to dislike about “X-Men: Days of Future Past.”

Lawrence proves once again why she is the biggest and best actress of her generation by reprising her role as Raven/Mystique.

Many Academy Award winners begin to take their career too seriously once they have hit pay dirt, but its good to see that she is combining critically acclaimed pictures like “American Hustle” with blockbusters such as “X-Men: Days of Future Past” and “The Hunger Games” franchise.

She is too young and too talented to be placed in only one box, unless the box is humongous with many different compartments for all of her abilities.

Furthermore, “X-Men: Days of Future Past” shows the downside of power.

Many strive to have power, but the mutants are able to show the pain and confusion that comes with their powers.

While it is a blessing, hearing the thoughts of others torments Charles Xavier (James McAvoy) and leads him to the bottle and the needle.

Nevertheless, “X-Men: Days of Future Past” falls into the same 3-D trap as “Godzilla” and other blockbusters.  The technology is fantastic, but not always necessary.

While the actors are superb as always, Jackman does not shine as brightly as he did in “The Wolverine.”

And most men would agree that any picture that stars Halle Berry (Storm) should have a clause in the contract that she appears in at least half of the scenes.

Storm’s presence is not necessarily needed in half of the film, but more of Berry is always better than less of her.

The X-Men face an almost inevitable demise, but the movie franchise is alive and well and the latest installment shows that being different can be one’s greatest gift.