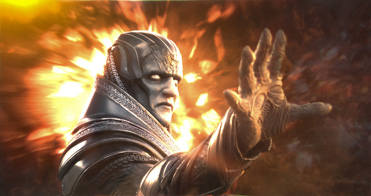 
Marvel Victim of Own Success

The problem with greatness is that one will always be judged by their pique performance.

Basketball icon Michael Jordan was not terrible with the Washington Wizards.  He just sometimes looked terrible when compared to his Chicago Bulls glory years.

“X-Men: Apocalypse” is not bad, but compared to its predecessors and the recently released Marvel film “Captain America: Civil War” it might seem that way.

According to popular theory, mutants first surfaced on Earth in the 1970s.

However, in “X-Men: Apocalypse,” the origin of mutants is traced back to over 4,000 years before Christ.

During the ancient days, Egypt’s supreme ruler was able to transfer his power and consciousness into different bodies in order to maintain rule without dying.

Unfortunately, when things go wrong his kingdom is crushed, but his underlings are able to protect him, keeping him alive but dormant until the 1980s.

It is during the decade of Michael Jackson jackets, Atari, Pac-Man and overhead projectors that the mutants are finally somewhat excepted into civilized society.

People have learned to live side by side with them, but they are still seen as a spectacle like caged animals at a zoo.

Although some of the former X-Men are still admired by the students at the School for the Gifted, their gift of superpowers seems like a curse at times.

Young students are grieved by telepathic gifts and the ability to see impending doom like the apocalypse.

Adults with superpowers have to live everyday in fear that their true identity as mutants will lead to their imprisonment and separation from their families.

And ultimately, they have to deal with a sleeping giant that awakes angrily to find a world that he no longer recognizes since his 5,000-year slumber.

In “X-Men: Apocalypse,” gone are the days of strong men and women.

Mankind’s strength has been replaced with weakness and weapons.

The god Apocalypse (Oscar Isaac), however, does find some strong soldiers left.  And in “X-Men: Apocalypse” he hopes to train them to use their full potential to destroy the current world and replace it with a new world order of sorts

“X-Men: Apocalypse” is stunning graphically as to be expected from the talented people at Marvel Studios.

The superpowers that the mutants possess are really cool.

Nevertheless, the story is formulaic and the outcome is never in doubt.

Additionally, too much time is spent getting to know each mutant and their particular gift and curse.

Those introductions end up being a bit lengthy.

The ultimate climax should have happened much sooner in “X-Men: Apocalypse.”

Nevertheless, “X-Men: Apocalypse” will still get all-star results like Jordan did with the Wizards because of the caliber of their past projects.

Marvel does not release trash.

It is just that when all of their films are put up against one another to see which was the greatest of all time, this film will unfortunately not live up to the bar that has been set in the past.

Unfortunately, greatness is something that takes more than a great effort to sustain.