This is 40 Film Sticks to Apatow Formula 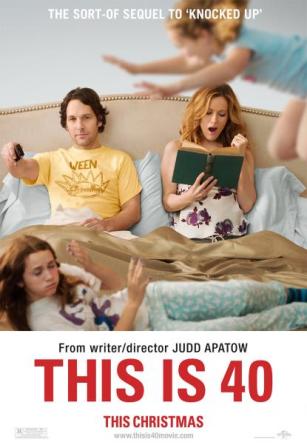 The This is 40 film dubs itself as the “sort-of-sequel” to the cult classic Knocked Up, which starred Seth Rogen as Ben and Katherine Heigl as Alison, a woman who becomes pregnant after a one night stand.

In Knocked Up, Heigl leans on her sister Debbie (Leslie Mann) for relationship and child-rearing advice, but what happens when the two people in the relationship hit that magical age?

The age when their bodies begin to change, children start to rebel, parents become needy like your children and your career is in quicksand, sinking when only a few years earlier it was skyrocketing like a meteorite.

How does one keep the romance alive as well as keep their sanity intact when they are in such dire straits?

Like many women Debbie refuses to accept the reality of her age.

Her 40th birthday is no reason to celebrate in her eyes.

Her oldest daughter Sadie (Maude Apatow) is going through those terrible middle school years.  Sadie’s younger sister Charlotte (Iris Apatow) just wants to have fun and enjoy life, which irritates her older sister.  And her husband Pete (Paul Rudd) needs to take Viagra to get into the mood, despite only being 40 years old himself.

The family is in financial ruin because Pete is financially supporting his leeching father and the artists he signs to his record label could not sell a CD if their life depended on it.

Furthermore, one of Debbie’s employees has stolen $12,000 from her boutique.

Both Pete and Debbie are at a mid-life crisis and their marriage is in crisis as well.

The This is 40 film contains much of the same crude humor that Judd Apatow is known for and it works again.

Pete’s father Larry (Albert Brooks) has little triplet sons, who are younger than his grandchildren.  He cannot tell them apart and is forced to cut their hair differently to make them distinguishable.

Debbie’s friend Barb (Annie Mumolo) has lost all sensation in her female region.

Sadie is being tortured online by a boy who looks like a miniature Tom Petty, and Debbie threatens to kill him when she confronts him at the school.

And Pete has a bad case of the wandering-eye, not being able to keep his focus off of Debbie’s star employee Desi (Megan Fox).

Nevertheless, the fact that the This is 40 film contains the same crude humor of Apataw’s previous films could suggest that he has mastered his niche or has not grown as a filmmaker.

The This is 40 film will receive thunderous laughter and applause from those 40 years older and younger, but will limit its reach with the older demographic because of the crude humor.

The This is 40 film is definitely a hilarious film, but one that suggests Apatow is becoming formulaic in his approach to filmmaking.  Even though crude humor is his domain, he might serve his career better by venturing more into satire or even trying his hand at drama and other genres of film.

Apatow is the best at what he does, but another wise man once said making it to the top is a lot easier than staying at the top.  The talented writer and director might have to change up his game plan in order to stay at the top of the movie industry.