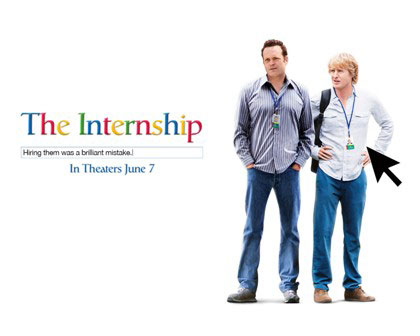 Owen Wilson and Vince Vaughn are back at it again in “The Internship,” and the duo has not missed a beat.

Sure they are older, but they still provide the kind of laughs that one comes to appreciate from their collaborations.

In “The Internship,” the two veteran actors play watch salesmen from a bygone era.  Technology has made their skill set obsolete and the two find themselves at a crossroads in life.

Their sales company folds without the boss informing them; Billy (Vaughn) loses his home and his woman, while Nick (Wilson) is forced to take a job selling mattresses with his sister’s boyfriend.

Down on their luck, Billy takes it upon himself to sign the two former salesmen up for possible internships with tech giant Google, despite not really attending college or knowing much about the online world or as Billy calls it “on the line.”

He enrolls the two at the University of Phoenix, or as they say the “Harvard of the Internet,” registering Nick as a Physics major.

They find out, obviously, that Google does everything online, including interviews, and they have to “fight” the children at the library for the computer because they do not have webcams on their personal computers.

But in typical sales fashion, they are able to convince the interviewers that they are only at the library because of their community service program, Attitude Adjustment, which mentors suburban children on what it’s like to be poor.

Nick and Billy miraculously land a spot in Google’s internship program, and head to California where they basically have to share one bed because that’s obviously all they can afford.  “The Internship” provides the typical laughs that moviegoers expect when the two collaborate, but “The Internship” has more of an inspirational message than a movie like “Wedding Crashers.”

While obviously out of their intellectual league and obviously the oldest participants in the Google internship program, their wisdom provides them with the intangibles (or “googliness”) that their colleagues do not possess.

They are able to teach their younger colleagues (aka “Nooglers” or new “Googlers”) about standing up for themselves, believing in themselves and treating others respectfully even if they are treated disrespectfully.

The two are able to combine their real world and life experiences with their cohorts’ technical acumen creating a beautiful team while at Google.

Some of the most memorable scenes are when they convince their cohorts to let loose and enjoy an adult beverage or too and enjoy some adult entertainment.

Nick and Billy are able to help the younger members of the group improve on their real-world deficiencies and the traditional college kids are able to work wonders with the two’s computer deficiencies.

“The Internship” can only be criticized for its unrealistic storyline about two down on their luck former salesmen who miraculously earn internships at Google with virtually no college background and no knowledge of technology.

However, people do not necessarily watch films with Wilson and Vaughn for the storyline, but for the comedy and the duo deliver the laughs with an inspirational message or two thrown in.

“The Internship” also features cameos from comedy giants Will Ferrell, John Goodman and Rob Riggle.  However, it is Wilson and Vaughn who undoubtedly steal the show, letting moviegoers know that they are back where they belong.