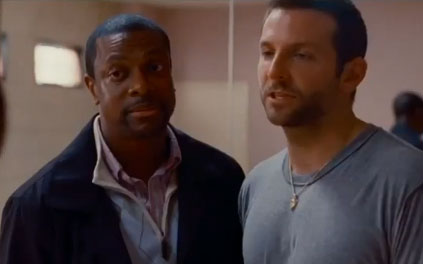 Dictionaries define the term excelsior as “upwards” or “higher.”  It is the act of always thinking positive and looking for the silver lining in all circumstances.

In the Silver Linings Playbook, finding that silver lining for Pat (Bradley Cooper) after all that has happened to him is an enormous task.  He has battled anger, like his father Pat, Sr. (Robert DeNiro), since childhood but after he finds the love of his life (his wife Nickie) in the shower with their co-worker, his anger reaches epic proportions.

Pat nearly beats his wife’s lover to death and is placed in a mental facility for diagnosed bipolar disorder.  Like many struggling with mental illness, Pat is the last to admit he cannot control his disorder on his own.  His wife gets a restraining order placed on him, but that does not stop his quest to regain her affection.

His friends try to hook him up with blind dates and his mother even participates in the shenanigans, but his heart is stuck in the past and not with moving forward with his life, even if it is in his best interest for his mental state.

Nevertheless, despite not wanting to let go of the past and not wanting to admit the obvious, Pat does find a silver lining in his entire ordeal and realizes that sometimes holding on to a negative past will keep one in a negative state of mind.

Silver Linings Playbook succeeds tremendously because it provides an empathetic portrayal of those who suffer with mental disorders and what their families and friends go through in an effort to help them improve their mental state.

The filmmakers use the comedic genius of Cooper and Chris Tucker to not make Silver Linings Playbook a melancholy film, but one that makes filmgoers laugh and think simultaneously.

Despite Cooper showing his acting range with Silver Linings Playbook, the star of the show is by far Jennifer Lawrence who plays Tiffany, a woman also suffering from mental illness, but a woman dedicated to winning over Pat’s heart.

As a result of her condition, she empathizes with Pat and does not judge him.  She teaches him how to stay disciplined and how to stay focused on finding that silver lining despite his current predicament in life.

Silver Linings Playbook does not fail in many areas, but it would have been great to see them expand on the character Danny played by Tucker.  As expected, he is absolutely hilarious in his small role in the film, but seeing Tucker with a larger role in a film that tackles mental issues would have been riotous.  Danny gives a whole lecture to Pat on how he was envious of his brother because his hair was long enough as a child to have a jheri curl and Danny’s was not.

In addition, what makes the film great (its comedy) could also be seen as insensitive to some who actually battle with bipolar disorder.

Nevertheless, Silver Linings Playbook succeeds enormously because the film tackles an issue many are afraid to even discuss.  That alone makes it a winner.