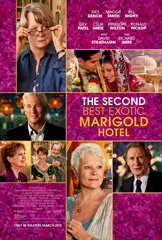 The Proverbial Fountain of Youth

My mother has a saying when it pertains to someone in his or her golden years (aka her age group; sorry Mama), which is “that girl or boy is young.”

Whether they are 80 years old with two hip replacements, two knee replacements and a glass eye, they are still young in her book.

While they may be old in regards to a calendar, those who paved the way for us need rejuvenation and a new lease on life at times, and many are able to find the proverbial fountain of youth at “The Second Best Exotic Marigold Hotel.”

When someone has something or someone else to live for it can add years to one’s life and definitely add meaning to one’s golden years.

What the Best Exotic Marigold Hotel lacks in amenities it makes up for in charm and character.

When British retirees visit India they develop a new lease on life surrounded by other senior citizens and a loving staff.

The hotel takes on a life of itself, and is extremely successful in more ways than one.  It provides a wonderful environment for those living out their retired years, and companionship for many who would otherwise be alone and lonely.

However, when dealing with the “elderly and the beautiful” there are several consequences that may arise on a daily basis.

Sonny (Dev Patel) has to conduct a roll call every morning to see if any of his guests have checked out the night before and moved on to that “upper room.”

Unfortunately, the aforementioned “upper room” is not in reference to the penthouse suite, but a sweet encounter with Jesus called Judgment Day.

With the success of the hotel, proprietor Sonny has visions of expansion and has his eye on one particular property for The Second Best Exotic Marigold Hotel.

He travels to San Diego to impress investors and attempts to woo hotel inspectors like Guy (Richard Gere).

Sonny’s attempts at career advancement sometimes come at the expense of his personal advancement as his insecurities threaten his engagement with his fiancée Sunaina (Tina Desai).

Although Sonny has learned a lot about creating a successful empire with his dreams of a hotel chain, he still has much to learn about life, love and relationships.

Hopefully, following the sage advice of his wise hotel guests will allow him to correct the errors of his ways before it is too late to salvage his growing empire.

Patel is the exuberant and ambitious star of “The Second Best Exotic Marigold Hotel” hands down.

With his fast-talking, cliché quoting personality, he exemplifies that hungry young adult so determined to make a name for himself in the world.

He has his fulfilled dreams right at his fingertips, but insecurity and a lack of trust could prevent him from reaching his potential.

Although Sonny is comical, his insecurity is real, and fear of success and failure is something every young adult struggles with.

However, like every other young adult, if they heed the advice from their elders then they can avoid destroying their dreams before they are fulfilled.

Nevertheless, “The Second Best Exotic Marigold Hotel” suffers from clichés of its own when it comes to the elderly female characters.

They all have a “Golden Girls”/Betty White characteristic about them, which has been exploited before by Hollywood.

But like White, the tenants at The Best Exotic Marigold Hotel have rediscovered their youth.  As a result of the hotel, they have all found their passion, purpose and place and that is even better than having a newer birth certificate.