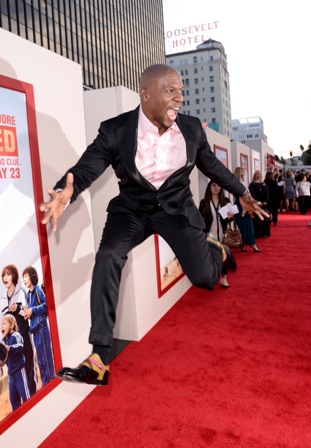 People who have been in long relationships know the difficulty of getting back into the dating game.

The pickup lines that worked in the 1990s only get a person laughed at in 2014.  And the lost art of actual communication has probably faded into oblivion permanently because of the popularity of modern technology like social media and texting.

Therefore, individuals who are trying to re-enter the dating game after a long time on the sidelines can empathize with Jim (Adam Sandler) and Lauren (Drew Barrymore).  Complicating matters even more is the thought that whomever they fall in love with will have to face the reality that despite love, blending a family might make it virtually impossible for true love to prosper.

Their friends, who think that they would make the perfect pair, fix up Jim and Lauren on a blind date.

Obviously, romance has never been Jim’s strong suit because he takes Lauren to Hooters on their first date where he drinks Lauren’s beer while she is in the restroom, makes her pay her half of the meal and gets special favors from all of the Hooters waitresses like Bubbles, Bethany, Britney and Bunny.

For a man, nothing says pathetic like all of the ladies at a Hooters or a gentlemen’s club knowing your first name like you are there every night.  It looks even more pathetic when you are trying to impress a young lady.

Both Jim and Lauren have been unlucky with marriage for different reasons, and both are forced to raise a house full of opposite sex children without much assistance from the same sex parent.

Jim, a manager at Dick’s Sporting Goods, dresses his daughters with clothes from the sporting goods store and takes his daughters, not to a beautician, but to the same barber he is a patron of.

His daughters look like the Russian female Olympians in the 1980s instead of the beautiful and dainty young women that they really are.

He even names his youngest daughter Espn (Emma Fuhrmann), pronounced “Es-pen,” after his favorite television network ESPN, although Lauren jokingly calls her C-SPAN when she is mad with her father.

In addition, Lauren has totally no control over her young sons Brendan (Braxton Beckham) and Tyler (Kyle Reid Silverstein).

They desperately need male guidance and input, but their father is not interested in raising his boys to be young men.

And Brendan desperately needs a girlfriend or better taste in girls.  He is totally infatuated with his babysitter for some ungodly reason and he is addicted to pornographic magazines.  Obviously, the magazines serve their intended purpose because he always sleeps with a smile on his face.

“Blended” has been done before countless times from “The Brady Bunch” to “Step Brothers.”

Every cinematic production of blended families has shown the importance of having a father and a mother in each household, and how that parenting dynamic can lead to wonderful adults.

In a society that has drifted away from stressing the importance of the mother-father dynamic, it is important that Hollywood stress the important role that a strong father and mother play in the development of their children.

Although single parents have succeeded since the beginning of time, there are certain things that only the same sex parent can teach their children.

Furthermore, the predecessors of “Blended” do not benefit from the comedic genius of Sandler and the perfect comedic timing of Terry Crews (Nickens).

And thanks to Sandler, Shaquille O’Neal (Doug) is slowly ditching his bad reputation received from films like “Kazaam,” which for some strange reason was not nominated for an Academy Award back in 1996.  That Oscar snub merits a recount or revote.

Nevertheless, O’Neal and countless others know the difficulty of blended families and the importance of stepfathers.

O’Neal is where he is today because of the dedication and sacrifice of his stepfather, Phillip Harrison.

Though Phil’s relationship with Lucille O’Neal Harrison may have been difficult because of the blended family dynamic, that same dynamic produced a proud and extremely successful young man.