Movie Review: Seeking a Friend for the End of The World 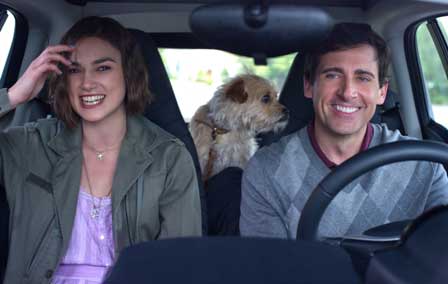 Steve Carell has turned over a new leaf.  Now do not get me wrong, the comedic genius has not strayed too far from his comfort zone, but in Seeking a Friend for the End of the World, the actor shows a dramatic and romantic side to go along with the laughs.

While Seeking a Friend for the End of the World is an enjoyable film and worth viewing, it is not the actor’s best work and comparing it to his other films might be the reason it is not great.

Seeking a Friend for the End of the World opens after NASA’s attempt to destroy an asteroid headed for Earth fails and the apocalypse is inevitable.  While it would be more realistic to depict the final days as dramatic and scary, the film takes a satirical approach to the end of the world.

Dodge (Carell) is an insurance salesperson that is attempting to remain calm and sale his company’s Armageddon insurance packages.  The radio deejays are promoting their End of Days Awareness concert and Dodge’s friends are trying to persuade him to walk on the wild side after his wife leaves him for someone else.

Diane (Connie Briton) coldly informs Dodge that his wife was never happy with him and secretly Dodge was never too happy either, always reminiscing about his lost love, his high school sweetheart.  And although married to Dodge’s good friend, Diane attempts to seduce him at an Armageddon house party where people are checking things off their bucket list, like injecting heroin, unconcerned about tomorrow because tomorrow is really not promised to them.

Dodge’s friend even encourages children to drink alcohol, telling them to “fight through the burn” at the Armageddon party.

Despite the end of civilization, Dodge cannot let his true self go, and after he meets his neighbor Penny (Keira Knightley) he is motivated to find his lost love after he learns from Penny that spending time with those that care is what is most important in the times in which they live.

The cast of the film is good, and Knightley brings a certain charisma and charm to Seeking a Friend for the End of the World.

Derek Luke also makes a brief appearance as Speck, one of Penny’s admirers, a man obsessed with the military and survival at all cost.

Nevertheless, despite having decent suitors, Penny is stuck in an on-again, off-again relationship with lovable loser Owen, played by Adam Brody of “The O.C.”

While initially upset that he has potentially lost the love of his life (his high school sweetheart, who apparently feels the same way as him), Dodge eventually discovers that everything happens for a reason and everything happens at the right time, regardless of how much time is actually remaining.

Audience members will laugh and romantics may even cry at Seeking a Friend for the End of the World. And while the film is enjoyable, it is not one of Carell’s best films, and that may hurt the film at the box office this weekend.