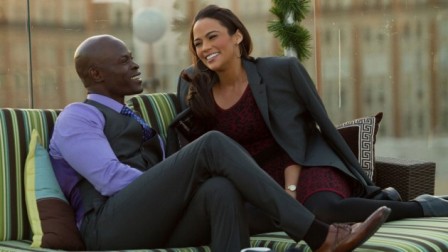 The magic is not in getting married, it is in staying married.

That word of advice is what kept William Wright’s (Derek Luke) parents married for over 40 years.

However, constantly searching for true love is what led Catherine Moore (Jenifer Lewis) down the aisle five times, and she is determined that her daughters Montana (Paula Patton) and Sheree (Lauren London) jump the broom at least once during her lifetime.

When younger sister Sheree gets engaged, Montana is determined to find a fiancé before her younger sibling says “I do.”

Her friends Gail (Jill Scott) and Sam (Adam Brody) come up with the dubious plan to use their connections with the airlines to re-introduce Montana to some of her ex-boyfriends with the hope of snagging a potential husband for their desperate friend.

Quinton (Djimon Honsou) is the wealthy mogul, who is looking for some “travel booty” and not a wife.

Langston (Taye Diggs) is the ascending politician with a domineering side to his personality.

Graham (Boris Kodjoe) is the man who Montana thinks is the one for her after he flies her to Chicago to spend Thanksgiving with him.  Gail even sends her off to the “Windy City” with some cranberry-flavored condoms, perfect for the holiday season.

William is the dependable and trusted best friend for 25 years.

And Damon (Trey Songz) is the epitome of the saying what glitters is not always gold, even if he is possibly responsible for some Gold records.

Despite having a storyline that could be considered redundant, “Baggage Claim” is an absolutely hilarious flick.

And although “Baggage Claim” falls into the dreaded (according to some men) category of chick flicks, David E. Talbert does an absolutely incredible job crafting the comedic screenplay.

Scott gives another side of her acting skills, playing the trusted sidekick of Montana, whose outlook on men forces Montana into some pretty nasty predicaments, such as sitting in a garbage can outside of one of her boyfriend’s home to see if he is all he says he is.

“Baggage Claim” features appearances by comedians Ricky Smiley and Thomas “Nephew Tommy” Miles as well as Lala Anthony (Tanya) who are all in when it comes to helping Montana nab a man, even if Tanya has to postpone shopping for Jimmy Choo shoes to contribute to the shenanigans.

The only thing that adds to the baggage of “Baggage Claim” and possibly wears it down is the predictability of the outcome.  Early on, it is obvious who Montana is going to end up with.

With divorce rates at an all-time high, marriage seems to be taken lightly by this current generation.

Many rush to the altar, only to rush faster to the courthouse to undo a bad decision.

The dream that many have of having an elaborate romance and idyllic wedding, should be met with the reality that marriage is hard work, although many people also complain about the hard work necessary to plan their dream wedding.

“Baggage Claim” shows us that sometimes what we want has always been there, we just did not know where to look.

But even once you find it, the hard work really begins after saying “I do.”