‘Anchorman 2’ is Kind of a Big Deal 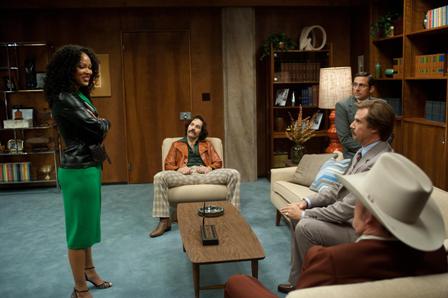 The news team from “Anchorman” is back together again and it is kind of a big deal.

Will Ferrell’s hit satire of the journalism industry gets the sequel treatment with “Anchorman 2: The Legend Continues,” reuniting the entire team that made staying classy the aim of news anchors everywhere.

When the legendary Ron Burgundy (Ferrell) is fired from his local New York affiliate in favor of his wife Veronica Corningstone (Christina Applegate), the popular anchor hits rock bottom, finding himself as the drunken emcee at a San Diego Sea World.

When an airlines tycoon births the idea of a 24 hours news network, he envisions Ron Burgundy as his 2 AM talent, not actually a coveted spot for a journalist.

In order to get back on the news, and win back Veronica who has left him for another man, Ron has to resurrect his former news team 10 years after their San Diego heyday.

Champ Kind (David Koechner) is operating a fast food restaurant, selling fried bats, or as he likes to call it “chicken of the cave.”

Brian Fantana (Paul Rudd) is a much sought after cat photographer and would be taking a career gamble by joining Ron at Global News Network (GNN).

And worst of all, Brick Tamland (Steve Carrell) is “dead,” or maybe just brain dead, but that is to be expected from Brick.

When Ron becomes a tad bit jealous of Jack, GNN’s primetime anchor, he challenges him to a competition.

If Ron and his team of media misfits earn better ratings (in the 2 AM time slot) than Jack (in primetime), then Jack Lime will have to legally change his name to Jack Lame.

However, if Jack wins the ratings battle, then Ron agrees to leave the journalism profession altogether.

In “Anchorman 2,” Ron’s news team are trendsetters once again from covering car chases, to live coverage of storms, to sports highlights that focus on home runs and slam dunks.

The team does not tell the stories the people need to hear, instead telling them what they want to hear.

The news team in “Anchorman 2” makes their national audience appreciate the good things going on in America, not just the negative stories about America.

Furthermore, when the news does turn negative like stories of the crack epidemic sweeping the country in the 1980s, they make the audience feel the story by smoking crack live on national television.

They even overcome their immediate arrests and continue to thrive on air.

However, “Anchorman 2,” also deals with the competition in the newsroom and the jealousy that develops for Jack because of Ron’s growing fame.

Director Adam McKay was able to assemble the entire team from the first film for “Anchorman 2.”  Good plays a strong and educated Black woman struggling to find acceptance as a media executive.  She is basically seen as a Jackie Robinson-type figure by some at GNN.

In addition, McKay was able to secure cameos from some of the biggest players in Hollywood for the second installment of the popular franchise.

And any film that stars such “idiots” as Ferrell, Carrell and Rudd cannot help but achieve comedic gold.

However, the film does not offer as many classic one-liners as its predecessor.

Nevertheless, the film will definitely provide a hilarious night at the movie theaters.

And as Ron Burgundy would say to his national audience at GNN: “Don’t just have a great night, have an American night.”