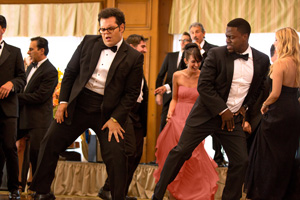 You Are Not Alone

Guys, you are not alone.  There are others like you and more than you think.

There are many guys out there who are loners and perfectly fine with it.  They would rather watch the game and drink a beer alone than hang out with the fellas at the sports bar.

They do not need constant companionship and moments where they confide in their friends and tell them their deepest and darkest secrets.

After all, that is a female trait and many men do not need that type of friendship until…their wedding day.

Sure, you have found the girl of your dreams and you want to give her the wedding of her dreams.

There is only one obstacle you have to conquer.

Who’s going to be your best man and give that heartwarming toast at the reception about you and your new beautiful and blushing bride?

There is only one catch.  Not only does Doug not have a best friend, he has absolutely no friends and needs seven groomsmen in addition to a best man.

Doug never thought a girl as beautiful as Gretchen (Kaley Cuoco-Sweeting) would be in the same game as he, let alone the same league.

Dimes (tens on a scale from one to 10) usually do not date deuces (or twos on a scale of one to 10), but maybe sometimes Hell does freeze over or women somehow lose their mind, because not only is Doug able to pull her, he is able to push down the doors of holy matrimony with a beauty queen on his arm.

Although he is shocked that Gretchen ever looked at him, he knows that the total truth about him might be the ultimate turnoff, so he lies about the number of friends he has, never knowing that one day he would need them to be a part of his wedding party.

His wedding coordinator refers him to Jimmy and Best Man, Inc. and the far-fetched lies commence.

In “The Wedding Ringer,” Jimmy has pulled off every wedding lie from being an Ethiopian Jew to wearing a Billy Preston-looking afro to an Ike Turner-looking permed-out wig, so playing a military priest from North Dakota should be a piece of cake, right?

Every film with Hart is filled with riotous laughter and “The Wedding Ringer” is no different.

Surprisingly, “The Wedding Ringer” is not only hilarious, but also charming and heartwarming at times.

Obviously, Hart is not considered a “serious actor,” but he might be the smartest and hardest working actor/comedian in the game.

While others like Chris Tucker rested on their laurels when they reached the top of the summit and only put out a movie every few years, Hart seems to put out a few movies every year, which is brilliant on his part.

The Jeremy Garelick-directed film is arguably Hart’s best effort.  The writing from Garelick and Jay Lavender is not of the typical slapstick variety, although there are those moments, which work perfectly.

Writing in “The Wedding Ringer” is clever especially the final line from Lurch (Jorge Garcia).

While “Ride Along” may have been Hart’s “Beverly Hills Cop,” “The Wedding Ringer” may be his “Coming to America,” the classic that lives forever in the minds of his fans.  And his fans, in the millions, are far too many to ever be alone in their praise of Hart’s latest film.