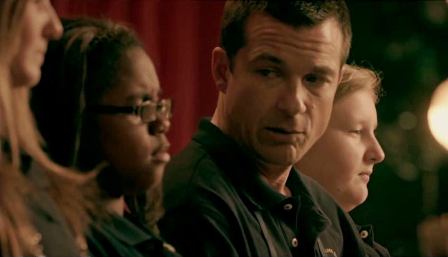 In the words of the illustrious Pastor Ralph Douglas West of The Church Without Walls in Houston, the great “theologians” The Persuaders would say, “it’s a thin line between love and hate.”

Conversely, any educator would also say it’s a thin line between perceived incompetence and ingenuity.

The film “Bad Words” starring Jason Bateman crystallizes that strange dynamic perfectly via a national spelling bee, a personal vendetta and bad role models for the next generation of possible geniuses.

Raised by a single mother who did not value the importance of an education, he dropped out of school in the eighth grade.

However, he was never unintelligent.  Actually, some educators believed he was really an intellectual prodigy despite the poor grades in his youth.

Nevertheless, when he finds a loophole in the rulebook of a national spelling bee, which requires participants to have passed the eighth grade by a certain date, he enters the children’s competition despite being older than some of the parents.

To the dismay of many parents and organizers, Guy breezes through most of the competition despite an un-level playing field.

The middle-aged participant even begrudgingly “befriends” another contestant, Chaitainya Chopra (Rohan Chand) who he nicknames “Slumdog” in a derogatorily funny spin on the film “Slumdog Millionaire,” which depicted life in the slums of India.

“Bad Words” definitely shines in the spelling scenes in which Guy has to raise the microphone to reach his taller frame and even stoops so low as to trash talk to the other contestants with pranks of menstrual cycles and alleged affairs with the mothers of contestants.

Nonetheless, “Bad Words” will be remembered mostly for Guy and “Slumdog’s” odd friendship, which is a less innocent reincarnation of Michael Jackson’s friendship with Macaulay Culkin.

While Jackson truly enjoyed the company of children and helped many along the way, Guy unfortunately only helps “Slumdog” to his first theft, drink and female breasts.

In “Bad Words,” Bateman is hilarious even though he seems to not be trying.

From sleeping with his sponsor in a hotel storage closet, to insulting the anatomy of the mothers and the wardrobe of the administrators, Bateman’s role a Guy should encourage educators to ensure that there are no loopholes in their academic rulebooks.

Nevertheless, “Bad Words” suffers from the inevitable reality of being unrealistic.  Fortunately for writer Andrew Dodge and Bateman, who also directs the film, moviegoers do not watch comedies to witness reality.  They do so to escape reality.

Ultimately on a philosophical level, “Bad Words” is about single parent homes and absentee fathers and the effect that their absence can have on children.

Guy has all of the intelligence in the world, but because of a lack of male guidance and no emphasis on education, his genius and ultimately his life is wasted on a dead-end job and dead-end life.