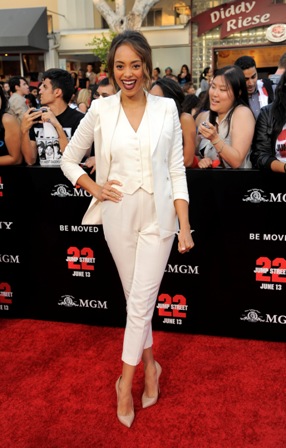 If it Ain’t Broke Then Don’t Fix It

Jonah Hill is a certified idiot and that is meant in the best way possible.

Minus the singing talent, his talents are reminiscent of a young Jamie Foxx.

Hill is talented enough to earn Oscar nominations and hold his own alongside the likes of Brad Pitt and Leonardo DiCaprio in dramatic features that show his range as a thespian.

Nevertheless, he does not take his work so seriously that he is above comedies that will never win awards but will win laughs for years to come.

Unlike the upcoming sequel to “Think Like a Man” that is a totally different film than the original, “22 Jump Street” is the exact same as its predecessor.  But despite knowing the story and outcome, it does not matter because of laugh out loud moments throughout the film courtesy of Hill and co-stars Channing Tatum and Ice Cube.

In “22 Jump Street” the only things that have changed are the location of the police department; Korean Jesus has been replaced with Vietnamese Jesus; and high school proms have been substituted for frat parties.

A new drug called “whyphy” is being abused by many students at the local college, even leading to the death of one of the school’s promising young students.

Captain Dickson (Ice Cube) gives Jenko and Schmidt the assignment, which is the exact same as their undercover high school operation.

That mission would be simple for “normal” undercover officers, but for “special” officers like Jenko and Schmidt, normal and abnormal are hard to decipher.

Tatum and Ice Cube more than hold their own in “22 Jump Street,” but it is Hill who steals the show and runs with it.

His scene-stealing comedy is the best one-man-show since Zach Galifianakis’ career-making role in “The Hangover.”

His un-Maya Angelou-like attempt at poetry was brilliant but will never make its way into a literature textbook.

Even his barefoot morning walks on the campus of M.C. State are hilarious.  His walk will become legendary like Spike Lee’s trademark stationary walk in his early movies.

And like many “nerds,” his popularity with the ladies increases from his high school days when he enters college.

But in typical Schmidt fashion he messes things up with Maya (Amber Stevens).

When Jenko realizes who Maya truly is he cannot contain his amusement.

Sure, critics will probably not like “22 Jump Street” but who cares?

The film does not break new ground.  It is definitely not Hill or Tatum’s best cinematic performance but at the end of the day it does not matter.

When people go to the movies after a hard day’s work, they often just want to laugh and be entertained.

“22 Jump Street” will have them laughing harder than the original did and that is saying a lot.

The “Jump Street” franchise can be cheesy at times, but it works well.

Like the old saying goes, if it ain’t broke, then don’t fix it.