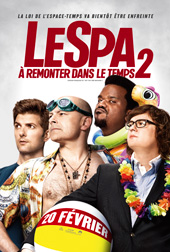 Hot tubs can be a beautiful place.  It can be romantic.  It can be sensual.  Or it can burn the crap out of you.

Unfortunately for “Hot Tub Time Machine 2,” it did not burn the actual crap out of the movie; it kept the crap in.

They were able to go back in time and create some of the most innovative technological advancements and creative expressions before they were actually invented by people with actual ingenuity and talent.

Lou created Lougle before Google could get in the search engine game.

Lougle is located in New Orleans, which Lou describes as the Silicon Valley of the South.

And Nick is able to reach pop icon status stealing songs by talented artists like Lisa Loeb before they actually created the intellectual property.

Lou is a bad dude and he is hated on by everyone from his employees to his son/butler Jacob (Clark Duke).

When Lou is shot where the sun does not shine at his own house party, they have to use the hot tub time machine to go back to the past to make amends with whomever Lou has beef with.

If Lou, Jacob and Nick are unsuccessful Lou may lose his life or something more precious than his life, his manhood.

However, when they hop out of the time machine, instead of going back into the past, they have gone back to the future.

Jacob is now running his dad’s company.  Nick is a has-been and a joke in the music industry, Neil Patrick Harris is president of the United States, and Lou is still Lou, drunk and an embarrassment.

The crew soon realizes that they have to alter the future to correct the past.

The outtakes during the closing credits of “Hot Tub Time Machine 2,” are hilarious and are the best scenes in the film.

The crew is able to rewrite history from the Revolutionary War to the assassination of President Abraham Lincoln and to the “I Have a Dream” speech and is even able to rearrange the members of the Beatles.

Not to sound too harsh, but moviegoers may wish they could hop in a time machine, and pay for another movie.

Despite “Hot Tub Time Machine 2” not being a very good movie, it still holds the distinction of not being as bad as “Jupiter Ascending.”  I needed a time machine to reverse that bad decision.

Those clips from the early 1980s are still hilarious and are still classic.

Murphy proved that hot tubs could be a lot of things including extremely funny.  Unfortunately, like cars and homes, they do not make hot tub jokes like they did back in the day.