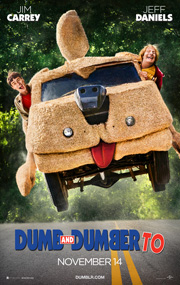 I am not the stereotypical movie critic.

Every film that I see does not have to solve society’s problems or paint an accurate portrait of the melancholy aspects of life.

Although I love real movies with provocative characters, clever screenwriting and complex storylines, unlike many of my contemporaries, I do not take myself so seriously.

Every now and then I like to act like a darn idiot for no particular reason.  And being a fellow idiot, I can appreciate the king of all idiots and donkeys, Jim Carrey and his comedic genius.

And while I might be alone in my praise of “Dumb and Dumber To,” I am proud to admit that I spent half of the movie with my hand over my face, shaking my head at Carrey and his lunatic sidekick Jeff Daniels.

Honestly, I should have known I was stepping into some laugh out loud moments from a movie with an incorrect spelling like “Dumb and Dumber To.”

In the film, Lloyd Christmas (Carrey) has been at the “nut house” for 20 years.

However, like the great friend that he is, Harry Dunne (Daniels) has visited him consistently over those two decades, cleaning his adult diaper and changing his catheter like any true friend should, right? (I guess that’s why I don’t have a gang of true friends because I ain’t doing that “ish” for any of my friends, but I digress).

However, to add insult to injury, Lloyd has been faking his disability for the entire two decades just to play a practical joke on Harry.

Despite the longevity of the joke, one has to admire Lloyd’s commitment because as he told Harry it would have been funny after 10 years, but not as funny.

In Lloyd’s absence, Harry had a falling out with his Asian parents and was forced to take a roommate to help pay Lloyd’s portion of the bills.

Although he is not as close with his new roommate, the new guy is very popular.  As Harry puts it, he cooks a rock candy that people from all over the city come to buy.  However, it makes Harry extremely dizzy when he eats it.

Unfortunately, Harry finds out that he is in desperate need of a new kidney despite the fact that he should be in a celebratory mood after reuniting with his best friend.

Since he is unaware that his Asian parents are not his biological family members, he has to find a blood relative that could possibly be a kidney match.

Thankfully, Harry finds out that he has a long-lost adult daughter that could be his saving grace, but Harry and Lloyd have to track her down at a technology conference in El Paso, Texas before it is too late.

“Dumb and Dumber To” is crude, rude, obnoxious, silly, dirty, offensive, totally Carrey-esque and absolutely hilarious in a juvenile, slapstick kind of way.

Going in you know what to expect from a film starring Carrey and he delivers like he has done since the days of “In Living Color” in 1990.

His movies do not make you think at all, but they definitely make you roll over in laughter.

The comedy in “Dumb and Dumber To” is frat house, locker room comedy that brings out the child in many adults.

No one can say that it is a well-made or well-acted film, but unless one takes themself too seriously, they have to say it is hilarious.