‘Ride Along’ Equals Hilarious Ride Thanks to Hart 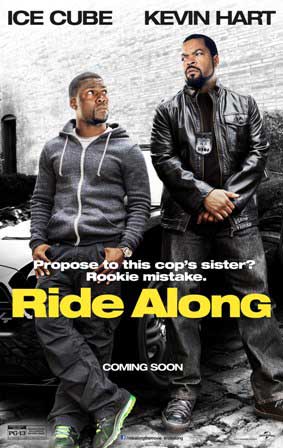 Much like the Ice Cube produced film “Friday,” his latest film “Ride Along” is a showcase of the comedic exploits of one of Hollywood’s fastest rising stars.

Rumor has it that the screenplay for “Friday” was only 60 pages long (which translates to 60 minutes on screen) and classic scenes were mostly a credit to the genius of Chris Tucker.

While the script for “Ride Along” does not suffer from the shortcomings of “Friday,” the plot is somewhat predictable and reminiscent of other recent films.

Nevertheless, the talent of Kevin Hart and Ice Cube are more than enough to make the film a fall-over hilarious ride, and probably the genesis of a successful cop franchise for Cube and Hart.

“Ride Along” centers around the difficulty that surfaces when two families must become one because of marriage.

Angela and her brother James (Ice Cube) have virtually been inseparable since the death of their parents, learning to only trust each other as a result of spending their childhood being shuffled from one foster home to the next.

Despite his imperfections, Angela is madly in love with Ben, and desperately wants her brother’s blessing since he is her only family left.

However, James has never been overly impressed with Ben, especially after an incident in which Ben accidentally set James on fire.

Nonetheless, when Ben’s dreams of being accepted into the Atlanta police academy come true, James has to come to grips that he may be seeing a lot more of Ben than he would like.

James agrees to take Ben on a ride along to see if he has what it takes to be an Atlanta police officer and James’ brother-in-law.

It is James’ intention to expose Ben to 126, or minor, cases to prove that the mean streets of “Hotlanta” are too dangerous for a little man like him.

While James is single-handedly trying to bring down Omar the biggest kingpin in Atlanta, a man that no one has ever seen including his own crew, he gives Ben such responsibilities as apprehending honey-soaked naked psychos and little children that are actually not much shorter than Ben.

The plot of “Ride Along” is something that moviegoers have seen many times, but that does not matter because of the unique comedic talent of Hart.

The film is a cross between a comedic “Training Day,” with elements of “Observe and Report” and “Bad Boys.”  The mysterious Omar is also much like the invisible kingpin Juntao in “Rush Hour.”

Regardless, the film is pure comedy gold from Hart’s rendition of Denzel Washington’s King Kong speech from “Training Day” to bad, out of control streetwise children yelling out “stranger danger” and accusing Ben of sexual assault.

The only inadequacies of “Ride Along” has to be the predictably of some of the scenes, the similarities to other films and a couple of out of focus shots.

However, people do not necessarily watch Hart and Cube films for their cinematic innovations; they do so to enjoy a few laughs along the ride.

And although it is early in 2014,“Ride Along” will probably still go down as one of the most outlandish films of the entire year and the start of a beautiful friendship on film.