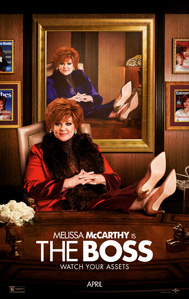 Queen of Comedy Retains the Throne

If Kevin Hart reigns as the undisputed king of comedy, which he does, then Melissa McCarthy sits next to him on her throne as the queen of comedy.

Both stars remain comfortable in their own lane, not wanting to veer off course in the least bit.

As a result, with “The Boss,” McCarthy keeps cruising along in her ride with much pomp and circumstance accompanying her.

Like Roscoe, Michelle never experiences the love she wants from family.

She is shuffled back and forth from an orphanage to foster homes.

Along the way, she develops a distain for close relationships with family and vows to make it in life without familial support.

While Roscoe developed into a celebrity talk show host, Michelle develops into a titan in the business world.

She is one of the richest women in the world and she acts like it, burning bridges with those “beneath” her on her way to the top.

With a little help from singer T-Pain at Chicago’s United Center, she makes it clear that all she does is win.

However, even Michael Jordan lost from time to time at the United Center and her career begins to hit a rough patch when she is investigated by the SEC for insider trading.

When Michelle hits rock bottom she has to cross some old bridges, even though she had long forgotten the bridge that crossed her over to quote my grandmother Mazie.

There’s nothing special about the plot in “The Boss.”

As previously stated, it is a rehash in some ways of “Welcome Home Roscoe Jenkins.”

The only difference with “The Boss” is that Michelle does not have a family to welcome her home.

So where does the prodigal daughter return when she has no parents or family?

Her talents on screen make up for any shortcomings she may have as a screenwriter.

Eva Peterson kills her role as Chrystal, the bully in ‘The Boss,” but her role is similar to Otis’ (Michael Clarke Duncan) oversized daughter in “Welcome Home Roscoe Jenkins” as well.

Many comedies have a special message and some tender moments and this film is no different.

“The Boss” highlights the crookedness and the greed that exists in corporate America.

The movie also depicts how not receiving enough love as a child can negatively affect adult relationships in the future.

However, fans do not buy tickets to a McCarthy film with hopes of leaving away with some wisdom.

They want to leave laughing so hard that their wisdom teeth writhe in pain.

Luckily for fans, the reigning queen of comedy delivers and then some.

She proves that her seat on the throne is well earned and it will take more than mere peasants to strip her of her crown and scepter.