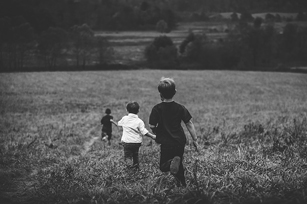 The game of tag remains popular amongst children.

Forgive me for my sappiness, but nothing beats our child years if you ask me.

Back in the day, many children had no cares in the world.

But somewhere down the line, people starting taking themselves too seriously as they dealt with bills, bad health and fake friends.

And although life should have its serious moments, that carefree innocence we felt as children should visit us from time to time to remind us what is really important about life.

“Tag” represents a totally hilarious and totally original movie that features the right actors to reach its comedic potential.

However, the friends in the movie “Tag,” inspired by a true story, show us how fun life can be if we took time to just enjoy life in a carefree manner with people who truly care about us, our childhood buddies.

The game becomes a never-ending competitive sport, but all competitors are not created equal.

If Jerry is the LeBron James of the sport, Randy, Callahan and Hoagie are the role players for the Cleveland Cavaliers like J.R. Smith, Rodney Hood and Tristan Thompson.

Throughout the three decades of playing tag, Jerry has never been it.

Jerry is too quick.

He is too cerebral.

And Jerry is too cunning to ever get beaten by a bunch of role players like his childhood crew.

As their childhood transitions into adulthood, the tag crew designate the entire month of May to playing the game of tag.

The crew only has one month to compete because different locations and different schedules make it more difficult for childhood friends to maintain the strong bond they once shared decades earlier.

That one-month makes the game more intense because friends might just show up at a friend’s job to tag them even if it makes a fool out of all of them.

When Hoagie shows up in Callahan’s office as Rebecca (Annabelle Wallis) of the Wall Street Journal interviews him for a feature, the reporter decides to cover the crew’s game instead of doing a profile on Callahan’s company.

Jerry plans to get married in the month of May and Hoagie wants the boys to go back to their childhood hometown so they can succeed for the first time in tagging Jerry, even though Jerry did not even invite the crew to the wedding.

That non-invite to the wedding shows just how serious the game can become.

Even though many grooms want their childhood buddies as groomsmen in their wedding, getting married during the month of May means that Jerry’s closest companions cannot even score an invitation to the festivities.

In “Tag,” the question becomes can Hoagie, Sable, Callahan and Randy crash Jerry’s fancy wedding and tag their elusive friend without ruining the most important day of his life?

Despite the wedding, the crew knows Jerry will never let his guard down, and taking him down will be like taking down Michael Jordan and the Chicago Bulls in the NBA Finals in the 1990s.

Throughout the game, the lessons of friendship and having fun even during adulthood resonate throughout “Tag.”

And despite the amusement of the film, “Tag” will have moviegoers contacting their childhood friends to reminisce about the innocence of their younger days growing up in the neighborhood.

In “Tag,” succeeding at the game becomes so serious that the boys resort to prank calls, waterboarding and faking serious situations in order to beat their bros at the game.

“Tag” will resonate because each friend has his own unique personality, which is true for many childhood groups of friends.

Many childhood friends do not have much in common as they get older but their upbringing. But that common connection of childhood memories keeps the bond tight despite the differences.

Randy is the marijuana addict who celebrates his divorce by getting high with his father (Brian Dennehy) and pretending that his ex-wife is deceased.

When Randy finds out that his childhood crush, Cheryl (Rashida Jones) lost her husband to an untimely death, he mourns for Cheryl’s loss with a big grin on his face.

Sable is the “throwed off” friend who just says things all the time that make no sense whatsoever.

Buress plays the role so well that he might not be doing much acting because he is the same irreverent character in many movies that he appears in.

Callahan is the successful businessman, presiding over a Fortune 800 company.

Because of his success, he thinks he knows everything.

He holds on to his prediction in 1989 that Ken Griffey, Jr. would never be as good at baseball as his father, Ken Griffey, Sr.

Although any baseball fan will know that turned out totally untrue by every stretch of the imagination, Callahan still believes his assessment of the Griffey boys is accurate.

And Hoagie is the most intense.

He is so intent on tagging Jerry, that he has involved his wife Anna (Isla Fisher) in the game, although girls cannot be a part of the game per the tag contract signed during their childhood.

And Jerry is the friend that is the superior athlete of the crew.

Even if introduced to a new sport, Jerry would be the one to catch on immediately and eventually dominate like he had played the game his entire life.

The mix of personalities creates the tension and excitement in “Tag.”

Moviegoers who do not approve of vulgar and crude comedies might not find amusement in “Tag.”

However, if rude and crude jokes float your boat, tag some of your best friends from childhood and see “Tag.”

Not only will you enjoy a good laugh over the Father’s Day weekend, the movie will give you a refresher course on what is truly important life, which are the people that care about you the most and having the most fun as possible before your ride on this planet is over.