Movie Review: ‘Life of The Party’ Doesn’t Contain Much Originality; But Contains McCarthy 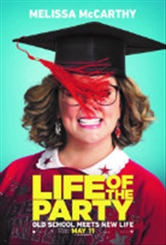 How Deanna Got Her Groove Back

Poet Langston Hughes once asked, “What happens to a dream deferred? Does it dry up like a raisin in the sun? Or fester like a sore—and then run? Does it stink like rotten meat? Or crust and sugar over—like a syrupy sweet? Maybe it just sags like a heavy load. Or does it explode?”

In “Life of the Party,” Deanna (Melissa McCarthy) deferred her dreams so that she could support the dreams of her husband, Dan (Matt Walsh) and daughter, Maddie (Molly Gordon).

But when her familial dreams crumble into bits and pieces, McCarthy (Deanna) rises from the ashes like a phoenix and delivers one of the most hilarious performances of her career.

In “Life of the Party,” Deanna epitomizes many women who put their lives on the back burner because of love, marriage and family.

Although Deanna makes it to her senior year as an archaeology major at Decatur University, Dan convinces her to drop out so he can finish his degree while they save money as newlyweds.

Deanna settles in nicely to life as a stay-at-home mom and wife, transferring her love for archaeology and higher education into love and support for Dan and Maddie.

Now it is Maddie’s time as a rising senior at Decatur University.

Deanna is proud that Maddie is attending her parents’ alma mater, but Dan is quick to point out that it is not Deanna’s alma mater because she never graduated.

Like many parents, Deanna is extremely nervous about parting ways with her daughter when it is time to going away to college.

But unlike many parents, Deanna is still getting nervous even though Maddie is a senior and living in a sorority house only 22 miles from Deanna and Dan.

Nevertheless, Deanna is proud that her daughter has almost completed a journey that her mother did not complete because of family obligations.

Her pride in her daughter almost makes up for the fact that she put her life on hold for her husband and daughter.

Like Beyoncé upgraded her man, Dan thinks he has upgraded his life because he plans to upgrade his wife.

While still on the campus of Decatur University after dropping off Maddie, Dan asks Deanna for a divorce.

To make matters worse, he plans to marry a beautiful real estate agent and the new couple wants Deanna’s old house because Dan put the house solely in his name.

At a crossroads in life, Deanna visits her parents looking for guidance, but all she gets is repeated offers of sandwiches from her mother and threats of violence towards Dan from her father.

However, returning to Decatur University to finish the last year of her curriculum presents the best option for Deanna to get her groove back.

And get her groove back she does from living on campus, to attending fraternity and sorority parties, to sleeping with young boys that are more age appropriate for her daughter to date.

And all the while, Deanna gets to inadvertently “ruin” Maddie’s senior year of college like Dan did to her.

Her dilemma in “Life of the Party” is trying to find her groove in college while not ruining the groove of her beloved Maddie.

At first glance, “Life of the Party” seems very derivative of other films.

“Life of the Party” contains elements of “Waiting to Exhale” when Deanna decides to burn all of Dan’s belongings.

The film “Life of the Party” also has elements of “American Pie” with Jack (Luke Benward) channeling his inner Finch (Eddie Kaye Thomas) from the 1999 comedy classic.

Like Finch, Jack is a little more refined than his peers.

While his frat brothers chug beers, Jack has a penchant for fine wine, and that bonds him with the more mature Deanna.

The odd couple bonds in other ways too, just like Finch did with Stifler’s mom (Jennifer Coolidge) in “American Pie.”

Deanna channels her inner Prince Akeem (Eddie Murphy) from “Coming to America” by getting decked out in an excessive amount of paraphernalia representing her new home away from home.

Furthermore, “Life of the Party” channels “Neighbors 2” with its emphasis on sorority life.

Despite not containing much originality, “Life of the Party” contains the secret weapon, McCarthy.

The comedic veteran is simply marvelous from romps in the library to her fainting at the thought of giving a presentation in front of an entire auditorium of younger classmates.

And while “Life of the Party” includes some of the usual Hollywood formula for female led comedies, including the battle between the mean and popular girls versus the social misfits, the film contains enough of McCarthy to make up for its lack of originality.

Deanna’s Uber confessional to a stranger is hilarious.

Those cries to the Uber driver soon turn into turning up at college parties because Deanna proves even in her more mature stature in life, she is still “down to clown.”

In addition, McCarthy does not share the comedy spotlight alone in the film. Maya Rudolph more than holds her own playing opposite of McCarthy.

Additionally, “Life of the Party” has enough twists and turns to keep moviegoers on their toes.

Furthermore, “Life of the Party” has enough pop culture references from today like Christina Aguilera to yesterday like “Girls Just Want to Have Fun” by Cyndi Lauper and “Get Outta My Dreams, Get Into my Car” by Billy Ocean at the 1980s themed party.

And although moviegoers will know ahead of time the theme and climax of “Life of the Party,” it is still a fresh party, as children of the 1980s would say back in the day.

“Life of the Party” is ultimately about a woman getting her groove back, despite the obstacles thrown her way, which proves that it is never too late to chase those deferred dreams.

As Hughes asked in “A Dream Deferred,” do those forgotten dreams explode?

For people like Deanna, rediscovering their passion might just cause them to explode or blow up and reach the full potential that they possessed all along.