Movie Review: ‘Hot Pursuit’ Hot in More Ways Than One 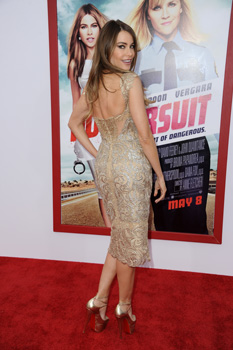 Don’t Judge a Book By Its Cover

Journalists usually frown upon their colleagues using clichés but things become cliché for a reason.

“Hot Pursuit” falls into all the aforementioned clichés.

Moviegoers know in advance that “Hot Pursuit” will heat up the screen because Sofia Vergara is beyond hot physically.

But, to my surprise the movie was actually good and hilarious and not just because I got to look at a good-looking woman on screen for 87 minutes.

Cooper (Reese Witherspoon) was born to be a cop, literally.

From the time she is an infant to the night of her prom, Cooper rides along with her police officer father learning the lingo and the lay of the land for law enforcement officials.

She is so intense about police work that her daily vocabulary sounds like the police officer rulebook.

Cooper is so out of touch with reality that she has never heard the term “riding shotgun.”  As a result, she Tasers a teenager who wants to ride in the front seat of his friend’s car, while he’s holding a flask, immediately igniting him in flames.

That story becomes so well known around various precincts that she has become something of an urban legend.

Cooper is demoted to desk duty because of that incident.  But when Vicente Cortez (Joaquin Cosio) is arrested, Daniella Riva (Vergara) and her husband Felipe (Vincent Laresca) agree to testify against the leader of the Cortez cartel, Cooper is asked to escort Mrs. Riva to the Dallas courthouse and protect her from Cortez’s goons.

However, when two sets of hit men show up at the Rivas’ house, Cooper is left alone with Mrs. Riva.

She must get her to Dallas even though the entire country is looking for the two, believing that Cooper is a killer and Mrs. Riva is her accomplice.

Vergara seems to play the same character in every movie with a couple of nuances, but that formula has not gotten old yet.

She is always hilarious.

And fortunately for her, even if she forgets her lines or deviates from the script, audiences will never know because like Cooper told her, only 30 percent of what she says is intelligible anyway.

Riva uses her assets to get her out of predicaments and plays on people’s perceptions of her lack of intelligence to outwit them.

“Hot Pursuit” has a totally “Thelma and Louise” feel, without the deep friendship from the female leads.

Unfortunately, “Hot Pursuit” is predictable.  However, that does not take away from it being a good film.

The predictability critique of a movie is cliché from movie critics too.