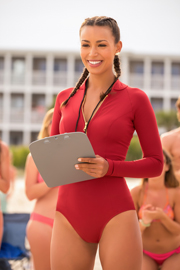 More Than Meets the Eye

The movie remake of the TV beach show “Baywatch” is actually better than advertised.

Going into the theater to watch the remake of “Baywatch,” excited would be the furthest adjective to describe my mood.

However, leaving the theater I actually found the slapstick humor, buffoonery and objectification of both sexes pleasantly enjoyable.

Despite the cheesiness and corniness of “Baywatch,” the movie is actually more than watchable and quite funny in a sophomoric way.

Honestly, no one watched the television show for great acting and storylines, so no one should expect that from the movie adaptation.

Teenage boys of the 1990s, like myself, watched the show to watch actresses like Pamela Anderson, Traci Bingham and Yasmine Bleeth.

And the creators of the show were geniuses to appeal to both sexes with all kinds of beach bodies on display to match every viewer’s desire.

That M.O. worked wonders for David Hasselhoff and crew from 1989 to 2000, and should do the same for the Seth Gordon-directed film.

The popular characters from the 1992-1996 version of the show are featured in the film version of “Baywatch.”

Zac Efron (“High School Musical”) has replaced David Charvet as Matt Brody.  Efron is actually more like swimmer Ryan Lochte with a grill in his mouth (custom jewelry for teeth), and real pictures with Olympic gold medalist Simone Biles than the original Brody.

And Kelly Rohrbach has replaced Anderson as the fan favorite C.J.

In the film version of “Baywatch,” Mitch and the crew are holding tryouts for new lifeguards.

As an Olympic gold medal swimmer, Brody believes that he is entitled to a spot.

Meanwhile, the chubby Ronnie (Jon Bass) is trying for the third time to make the lifeguard squad, in which he would stand out like a sore thumb because of his less than stellar physique.

As a matter of fact, it is hard to determine if he can even survive the tryout after he gets a part of his physique stuck in a wooden chair thanks to C.J.

And thanks to the ambitious Mitch, the lifeguards become more like detectives after they begin to investigate the presence of the illegal drug called “flocka” floating throughout the beach.

However, investigating the influx of the illegal drug as well as other illegal activities, places the “Baywatch” lifeguards at odds with law enforcement officials, politicians and businesspeople who start to realize that the lifeguards are a threat to their nefarious activities and livelihood.

“Baywatch” is not a great film, but it is not as bad as some have predicted thanks to the hilarious comedic timing of Johnson, Bass and Efron.

Even Yahya Abdul-Mateen II (Sgt. Ellerbee) of Netflix’s “The Get Down” brings the heat in this hot and steamy comedy.

Mitch and Ellerbee have to put Brody in his place when he uses the phrase “you people,” which is generally reserved for African-Americans.

Furthermore, Mitch refusing to call Brody by his name, instead referring to him as every boy band from New Kids on the Block to One Direction is hilarious.

Unfortunately, “Baywatch” will not connect with all audiences because of its immature humor and reliance on physical beauty to sell tickets.

However, the film is still worth a ticket and is surprisingly enjoyable at times and extremely funny at other times.