Film Review: Will Ferrell Sticks to Script in ‘Daddy’s Home’ 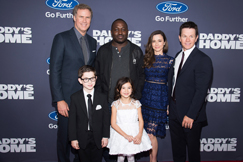 If it Ain’t Broke

In Hollywood, no idea is really original.

The entertainment industry likes to recycle ideas, characters and jokes.

Will Ferrell has mastered this reality and is riding the formula all the way to the bank and that’s not necessarily a bad thing.

In “Daddy’s Home,” Ferrell combines his comedic genius with an unoriginal idea to make another comedy hit.

Brad (Ferrell) is an all around great, if not boring, guy.

He has found the love of his life in Sarah (Linda Cardellini).  Brad even has fallen for his two stepchildren Megan (Scarlett Estevez) and Dylan (Owen Vaccaro) despite the fact that they have not fully accepted him.

His relationship with the kids has a kind of “Are We There Yet” vibe.

As a result of a bizarre X-ray accident at a dentist’s office, Brad cannot have children of his own so he pours his affection into the new “brats” in his life.

The children finally begin to accept Brad as a male role model when their real father Dusty (Mark Wahlberg) comes back into their life.

He is desperate to win back his ex-wife Sarah and his kids, and declares an all-out war against Brad.

To Sarah’s credit, she definitely does not have a type because her current husband, Brad, is the total opposite of her ex-husband Dusty.

In “Daddy’s Home,” the two fathers will do anything to buy the love of Dylan and Megan from bribing them with money to buying $18,000 tickets to the New Orleans Pelicans game.

The jokes in “Daddy’s Home” run the hilarious gamut of weird plugs for the Ford Flex.  I wonder how much Ford paid for that product placement.

To Dusty inviting Griff (Hannibal Buress), a Black stranger who was only in the house to fix damaged sheetrock, to live with him, Sarah and Brad just to prove he is not a “racist” like Brad.

Buress is the same comedian who exposed Bill Cosby’s dark past of alleged rape.  So, I guess Ferrell felt obligated to give him a job so that his skeletons could stay in the closet.

Buress is hilarious in “Daddy’s Home,” but very awkward and strange in his role.

It is as if they added his character at the last minute, and he just makes surprising cameos in random scenes.

However, unlike other Ferrell classics, “Daddy’s Home” has a few universal morals to it.

There are morals about what it takes to be a real father.

There are morals about competition, and how there will always be someone just a little better than you at something.

And there are morals about what makes a person a truly great person, and not just great on the exterior.

The stories in “Daddy’s Home” combined with the laughs generated by Ferrell, Wahlberg, Buress and the children make the film another enjoyable flick to add to the Ferrell catalog.

The only thing that is missing is originality with the story, characters and style.