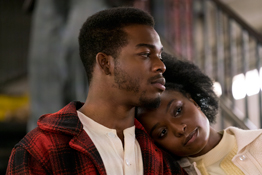 If Beale Street Could Talk, it Would Shriek in Pain

Visitors to Beale Street probably imagine dancing in the street, adult beverage in hand and not a care in the world.

And visitors to Beale Street probably leave the festive atmosphere thinking how grand life is and how great the future can become.

But to the residents of Beale Street in the movie based on James Baldwin’s novel, the avenue presents a much bleaker outlook on life and society.

In actuality, Beale Street is not the world famous entertainment district that produced the likes of B.B. King and Elvis Presley.

Beale Street is any street in America in which the African-American community finds itself struggling for survival and just barely maintaining an existence.

Beale Street in “If Beale Street Could Talk,” is today’s Martin Luther King Blvd, and many moons and miles away from the hope and prosperity of Main Street.

Main Street has its bright lights and pristine homes, businesses and buildings.

On the contrary, Beale Street barely has working streetlights or running water.

And as Fonny (Stephan James) says in “If Beale Street Could Talk,” America hates ni****s.

That hatred is evident and crystal clear in “If Beale Street Could Talk,” a haunting depiction of the hell African-Americans face battling a racist, oppressive and downright devilish American criminal justice system.

In the process, filmmaker Barry Jenkins (“Moonlight”) produces a lyrical, jazzy and often scary movie that has elements of Spike Lee’s directorial style.

Like Lee, Jenkins uses “If Beale Street Could Talk” as a way of holding a mirror to America’s racist past and present like the aforementioned Lee did marvelously in “BlacKkKlansman” and so many others in his dynamic filmmaking catalog.

Despite the grim circumstances that African-Americans find themselves surrounded by in 1970s New York City, Tish Rivers (KiKi Layne) and Alonzo “Fonny” Hunt (James, “Race”) have find love, and therefore hope, in each other.

Fonny and Tish have been best friends since they were toddlers taking bubble baths together.

But a romantic love develops when Tish is 19 years old and Fonny is 22 years old.

But although the budding couple has found hope in each other, Fonny’s family hopes that they can put an end to this young love before its has a detrimental impact on Fonny’s future.

Mrs. Hunt (Aunjanue Ellis) is a devoutly Christian woman who has raised her children to fear the Lord and His commandments.

The Holy Roller does not approve of any lustful sins like premarital sex.

So when Tish announces that she is pregnant with Fonny’s baby, she does not receive much love from her future in-laws.

The Hunts never believed that Tish was good enough for Fonny, and this baby could only drive a bigger wedge between these two families.

The two families symbolize the Hatfields and the McCoys in many respects.

They symbolize water and oil.

They do not mix.

But the baby on the way will force them to mix for better or worse.

The better is that Fonny and Tish share a real love that is nearly impossible to break.

But for worse, Fonny finds himself on the wrong side of the law like so many other African-American men past, present and future.

Fonny gets arrested, he says falsely, for the rape of a Puerto Rican resident of New York.

Unfortunately, the families do not have the financial resources to pay for the best lawyers.

To complicate matters even more, the alleged rape victim has fled New York City for Puerto Rico, constantly postponing Fonny’s trial and his chance of proving his innocence before the birth of his baby.

In “If Beale Street Could Talk,” Tish, her sister Ernestine (Teyonah Parris, “Chi-Raq”), her mother Sharon (Regina King) and her father, Joseph (Colman Domingo, “The Birth of a Nation”) have to pull their resources together to find justice for their new family member.

If they do not, then Fonny becomes just another statistic in the American system of injustice.

And Fonny and Tish’s baby becomes just another young African-American child growing up in a home without a father.

The most disturbing reality of “If Beale Street Could Talk” is that the film takes place in New York in the 1970s, but could be representative of any decade and any city for African-American men.

Nothing has changed in the 40 plus years since “If Beale Street Could Talk” takes place.

African-American families are still being ripped apart by poverty, crime, racism, mass incarceration and the prison industrial complex that aims at keeping the community enslaved and disenfranchised in perpetuity.

Even when good young adults like Fonny and Tish attempt to do everything by the books, they soon realize that they are not reading from the same pages as their White counterparts.

But the support of a loving family can provide refuge for an African-American man shivering from the cold and bitter reality of life in a racist nation.

“If Beale Street Could Talk” is presented as if reading the novel itself or as if listening to beautiful poetry set to a soundtrack of classic jazz music.

Luckily, “If Beale Street Could Talk” does cry out with hope also.

Though hard to find, Tish and Fonny do find people from other communities that understand their plight and see the humanity in all of their brothers and sisters despite skin color.

The African-American artists of the real Beale Street have voiced the same cry for humanity, fairness and justice that their non-musicians brethren have cried about for centuries.

But unfortunately in the 21st century, African-Americans on Beale Street have yet to have their cries answered.