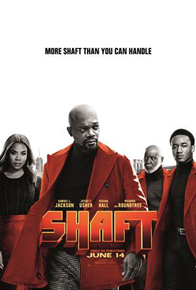 Since the early 1970s, moviegoers the world over have known Shaft as a bad mutha.

And since the late 1980s and early 1990s, moviegoers have known that actor Samuel L. Jackson is a bad mutha too.

Thanks to the vulgar genius of Jackson, the 2019 version of “Shaft” combines the two bad a$$ Hollywood institutions to resurrect a dying franchise, which will introduce a new generation to the man who would risk his life for the brother man.

In the fifth iteration of “Shaft,” John Shaft II’s (Jackson) baby mother (Regina Hall) has had enough with the Shaft way of life.

The private investigator does his good deeds by bringing bad guys to justice.

But wherever John II goes, destruction and violence follows.

That “excitement” kind of turned her on for a minute in her younger days.

However, the birth of their son J.J. (Jessie T. Usher, “Almost Christmas”) has her reevaluating her priorities in life.

When she and John II find themselves ducking a hail of gunfire on the streets of Harlem in 1989, she has finally had enough with her man’s line of work.

This time the danger hits too close to home because the couple has J.J. in the back seat as the would be assassins try to take out John II.

She takes J.J. as far away from his father as possible and gives him the life she could not in Harlem and around John’s business as a private detective.

Throughout the next 25 years of his life, J.J. has virtually no encounters with his daredevil father except for a few inappropriate birthday gifts throughout the years like nude magazines and condoms.

Despite the lack of a real father figure, J.J. does well in life.

He has a great relationship with his mother.

The young Shaft has a prestigious college degree from M.I.T.

And he has a data analyst job at the FBI.

What J.J does not have is swag or any connection to the African-American community.

According to John II, J.J. listens to music that even White people would not listen to.

As his estranged father said, his mother succeeded in turning J.J. into a White boy.

The brief time that John II has with J.J., the father tries to introduce his son to as much authentic culture as humanly possible.

He teaches J.J. how to talk to the opposite sex, telling him that men never apologize no matter how wrong they are.

John II introduces his son to real Black music, like the song his parents possibly conceived him to, “The Secret Garden (Sweet Seduction Suite)” by Quincy Jones featuring Barry White, El DeBarge, Al B. Sure and James Ingram.

If “Shaft” moviegoers really know Black culture, they will recite certain lyrics from “The Secret Garden” in unison during the movie.

And if Black moviegoers do not know certain lyrics to “The Secret Garden,” their Black card should be immediately revoked.

Nevertheless, swag and culture remains elusive for young J.J and his Black card is in danger of being taken away by his own father.

But what J.J. lacks in swag, he makes up for in loyalty.

His friend Karim constantly tells J.J. not to mention that he has desk job with the FBI.

Karim tells him he should instead let people assume that he has a field job with the FBI.

He encourages J.J. to take his job with the FBI seriously.

Therefore, when authorities find Karim dead of an apparent drug overdose outside of a Harlem trap house, J.J. does what a real friend would do.

J.J. works to restore Karim’s reputation while working to discover if his friend’s death was more than an accident.

Karim once had a drug addiction while coping with the stress of fighting wars overseas.

However, he had turned his life around and had begun giving back, working with an organization called Brothers Watching Brothers dedicated to helping veterans return to civilian life without the assistance of drugs or alcohol.

But when J.J. begins investigating Karim’s death at Manny’s dope house in Harlem, he immediately realizes that he is out of his league dealing with street crimes.

And although he still has disdain in his heart for his absentee father, J.J. knows that the only person that can help him solve his best friend’s mysterious death is the elder Shaft, especially when his superiors at the FBI refuse his input.

Jackson’s performance in the newest installment of the “Shaft” franchise is reason enough to pay for admission.

The profanity that Jackson has become known for has never been more perfect than in the 2019 version of “Shaft.”

His ridicule of his son, who has apparently been deprived of Black culture for virtually his entire life, is bad parenting but great cinema.

J.J.’s father makes fun of the name of Karim’s organization, Brothers Watching Brothers especially when the man working the desk at the organization makes a pass at J.J. via suggestive eye contact.

But when John II sees his son in action, he realizes that apples truly do not fall too far from the tree even if someone attempts to distance the apple from that same tree.

With help from his grandfather John (Richard Roundtree, “Being Mary Jane”) and his father, J.J. proves that the last name Shaft is all that he needs in the swag department in order to stick it to the man.

While the acting across the board in “Shaft” is not great, the character development of J.J. and the attitude of John II more than make up for any shortcomings the film might have.

J.J. is a little too out of touch and nerdy at the beginning of “Shaft.”

Nevertheless, director Tim Story does a great job of injecting Black culture in the film whenever possible from scenes at the Black newspaper New Amsterdam News to music like “Feel Me Flow” by Naughty by Nature.

Graphically, Story even injects the 1970s feel into the 2019 version of “Shaft.”

And while no actor can match what Roundtree accomplished in the 1970s with his iconic performance as John Shaft, Jackson shows that if anyone has enough swag to come close and carry the film it is him.