Who Should Portray POTUS, First Family in Potential Obama Film? 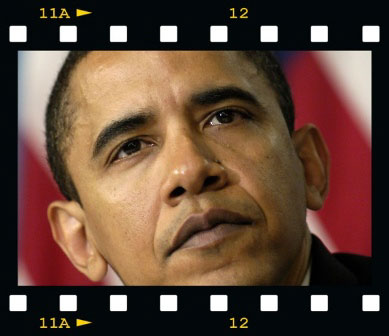 A possible biopic on President Barack Obama has everyone debating who should portray the POTUS and the First Family (Photo courtesy of Graphics Master X 2011).

The story plays out like a Hollywood screenplay, already.

A Chicago-based community organizer turned commander-in-chief and first Black president to take a seat behind the historic “Resolute” desk (favorite hiding spot of JFK, Jr.) in the Oval Office.

The product of a Kenyan father and American mother, carrying the name Barack Hussein Obama! Even Hollywood couldn’t imagine a more interesting plot, but I’m sure they will attempt a movie about it.

An Obama film has been buzzing around Hollywood since his election in 2008. And though his unconventional path to the White House has spawned countless books, documentaries and TV specials, a biographical Obama film hasn’t materialized… yet.

But if the box office success of Oscar-nominated Lincoln is an indication of moviegoers’ interest in presidential flicks an Obama film isn’t far off the radar screen.

The First Lady has already beat the casting agent to the punch by suggesting a little well known actor that shares one noticeable trait with Obama.

“You’d need to find someone pretty cute to play Barack. Will Smith or Denzel Washington might be able to pull it off,” Michelle Obama recently told PopSugar.  “Will’s got those ears, though, which might give him an edge.”

Smith says the ears make him the obvious choice for an Obama film.

“Barack and I have both got [big] ears,” he told the BBC in an interview. “So I’m the most natural choice.”

According to a poll from MetroMix, 46 percent agree that Will Smith could play the president in an Obama film. Pollsters ranked Denzel Washington second with 24 percent and 17 percent of voters think Obama should play himself in a biopic. (Sorry Drake, you weren’t mentioned).

Danielle Belton, editor and writer of Black Snob, a blog about pop culture and politics, writes that she doesn’t care if Smith has the ears she doesn’t want to see him portray the two-term president.

“Even though I enjoy Will Smith as an actor, I haven’t been convinced of his acting,” Belton explains. “In Michael Mann’s Ali he was really dedicated to getting himself in working shape. But onscreen it seems forced. Obama has an effortless charm mixed with being serious and emotionally complex and I don’t know if [Smith] could handle that complexity.”

But she believes the ever supporting actor Harry Lennix (more known by face than name)—who has starred in a bevy of TV shows and movies including The Five Heartbeats and Barbershop 2—would be up for the challenge.

“If I had to pick [it would be] Harry Lennix because he looks a lot like him,” says Belton. “He has an overly sophisticated poise and [seems] really warm. He could pull off a phenomenal Obama,” she adds.

And others agree. Last year, Esquire magazine named Lennix as the actor to play the president in an Obama film because of their Chicago roots and both had roles as the president. A “Harry Lennix Should Play Obama” Facebook group popped up two years ago and garnered many likes.

Samme Samareta lobbied his choice to play the first family on the group’s page.

“If there is going to be a movie about Barack and Michelle Obama, I would like Harry Lennix to play Barack and Taraji P. Henson as Michelle,” Samareta notes.

Belton points out that the lead actor will depend on the film’s focus and genre.

“If you want the big blockbuster Oscar-bait [movie] Will Smith is the logical choice,” Belton decides. “If they took an artistic approach, Harry Lennix could play a convincing Obama.”

What would be even more realistic is if the Obama film not only charted his ascent to the Oval Office but also his struggles growing up biracial, which he describes in the New York Times bestseller Dreams From My Father, says Belton.

“It would be interesting to look at what he talked about in his book; being a biracial man—his life from being a teenager up to when he moved to Chicago,” she reveals. “I don’t think that’s really been done other than Alex Haley’s Queen. [It would] be nice to see the issue carefully examined in a well made film.”

Thomasena Farrar, creator and writer for Music Movies Thoughts blog, envisions the same Obama film but with an actor that is more familiar with Obama’s psyche.

“The most interesting choice is Hill Harper because of [his] friendship [with the] president,” Farrar explains. “It would stretch Hill’s [acting], and he does have personal knowledge of the president.”

Harper and Obama struck up a friendship attending Harvard Law School in the ‘80s and the “bromance” has since spanned over 20 years. Obama recently asked Harper to join his cancer panel after becoming a thyroid cancer survivor in 2011.

“[Harper] knows the most difficult decisions and best moments of his presidency,” Farrar continues. “It would be interesting to see how partial or impartial he might be.”

However, the mere mention of fan favorites Washington or Smith appearing in an Obama film resulted in a resounding “No” from Farrar.

“[They’re] both aging; [the title role] is not within their demographic,” she notes.

A point Missouri resident Kenneth Freeman was quick to elaborate on.

“Realistically, I believe that if a movie were to be made around 2017 or 2018, the top three candidates for the role will be Gary Dourdan, Terence Howard and Idris Elba,” Freeman offers. “They are the best Black actors out there who four years from now will have the youthful appearance of the president evident in 2008,” he adds.

Besides, Farrar reasons, “[Smith] and [Washington] have had their time, let other people shine.”

And no one has the radiance to play the First Lady like Scandal’s Kerry Washington in an Obama film, says Farrar.

“Kerry Washington because some of her mannerisms are reminiscent of Mrs. Obama,” rallies Farrar. “She’s a fantastic actress and given the right material, [she will bring a] strong persona to it.”

Belton imagines comedienne Aisha Tyler could be tailored to play the First Lady in an Obama film because of her regal stature.

“Aisha Tyler [because they are] both very tall and pretty,” says Belton. “If I was going to pick someone based on type, she would be easy to transform into Obama.”

As far as the darling Obama daughters that have transformed from cute girls into young ladies nearly overnight, Belton thinks Master P’s daughter Cymphonique Miller, 16, star of Nickelodeon’s How To Rock!, could play Malia in an Obama film.

Farrar suggests adorable upstart Quvenzhane Wallis, 9, and youngest actor nominated for an Oscar for indie film Beasts of the Southern Wild for Sasha.

Now comes the hard part, the director. The usual suspects would be Mann, Steven Spielberg, Oliver Stone and Spike Lee, a few visionaries Belton endorses for an Obama film.

Farrar suggests a more groundbreaking approach for an Obama film.

“I was at a Philly screening of Broken City and got a chance to talk to [director] Allen Hughes about [his 1995 movie] Dead Presidents,” Farrar recalls. “So based on that exchange I would choose him [to direct an Obama film].”

Farrar also suggests Charles S. Dutton, due to his most recent work as writer, director and actor in The Obama Effect, an indie film about how a man’s health scare prompted him to tirelessly support Obama in his 2008 presidential bid.

Dutton was kind enough to let Regal readers in on his crystal ball for what an Obama biopic would look like.

“The film will have far more money to spend than we had, much bigger stars than we had (and) a major director, probably. It will be promoted, financed, distributed, reviewed, lauded and praised. But it still won’t be as good as The Obama Effect.”