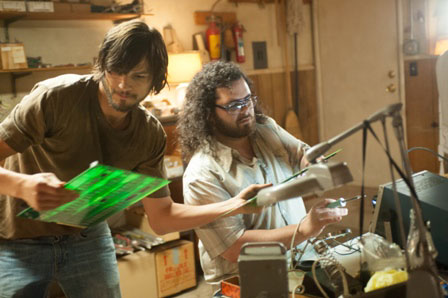 A Thin Line Between Genius and Crazy

Apple founder Steve Jobs’ ingenuity took him places that few visionaries go, but his drive for the extraordinary often alienated him from those closest to him and at times left him bitter and lonely.

The biopic “Jobs,” starring Ashton Kutcher as the late founder, does not quite live up to expectations but is still a good film that does not sugarcoat the founder’s sometimes evil ways, but shows that genius does not always equal fairness and humility.

The beginning of “Jobs” is prototypical to the story of many college-aged young adults at anytime throughout American history.  Not quite an adult and no longer a child, Steve is at a crossroads in life.  He is attending classes at Reed College, but is no longer a registered student.

He seems more interested in learning than obtaining the job security of a college degree.  He experiments with drugs and different women, which is typical for many college men.

Jobs does not lack intelligence, but he lacks a challenge in life, which he does not find in college and he does not foresee in a regular nine to five job.

What Jobs does respond well to is the desire for greatness and with the help of friend Steve Wozniak (Josh Gad) he is able to design a top-notch video game, by 1970s standards, brining in a $5,000 pay day.

As a result of their video game score, Wozniak’s computer ingenuity sparks a revolutionary idea in the mind of Jobs.  He foresees the popularity of a business market that doesn’t even exist yet, the market for personal computers.

With his vision, Wozniak’s skills and Mike Murkkala’s (Dermot Mulroney) financial investment, he launches Apple Computers, which would eventually revolutionize the way people work, communicate and listen to music.

Kutcher’s performance as Jobs is his best to date.  The young actor proves that he can become an iconic figure like Jobs, even mimicking his walk and looking like the late CEO in his later years of life.

He is able to mimic the intensity that it must have taken for Jobs to transform a project in his parent’s garage to a multi-billion dollar corporation.  Kutcher even foams at the mouth in his many run-ins with employees and Apple board members.

It shows the deadbeat father who kicks his girlfriend out of his house when she informs him that she is pregnant.

The film shows the arrogance that Jobs had, which enabled him to climb the heights of success, but alienated himself in the process.

He even has a large painting of Albert Einstein in his living room, which is indicative of how he viewed his intelligence.

Also, the movie shows he was willing to disregard those who helped him start the company in that garage, once he felt they were no longer relevant.

However, “Jobs” should have also portrayed how he turned the company around in his later years, and not focused as much on the negative aspects of his tenure at the helm of the company.

It would have been great to see how his personality changed as he aged with the company before his passing, and hopefully how he was able to combine his ingenuity with some much-needed humility.