Film Review: ‘On the Basis of Sex’ Shows Right is Right, Wrong is Wrong 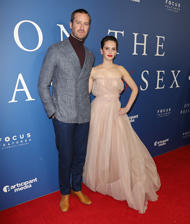 Armie Hammer (left) and Felicity Jones attend a special screening of “On the Basis of Sex” in New York (Photo Credit: Kristina Bumphrey/StarPix).


On the Basis of Everything That’s Right

“On the Basis of Sex” could possibly change its name and have the same effect.

What about “On the Basis of Equality?”

What about “On the Basis of Decency?”

Or better yet, “On the Basis of Fairness.”

Lastly, what about, “On the Basis of What’s Right?”

“On the Basis of Sex,” the biopic on United States Supreme Court Justice Ruth Bader Ginsburg (Felicity Jones) is as timely as it is timeless in its depiction of a woman brave enough to challenge the status quo on gender in American society.

Along the way, “On the Basis of the Sex” becomes the perfect movie moment for the #MeToo movement, portraying a woman who refuses to not be taken seriously in a male-dominated society.

Furthermore, it represents a woman who refuses to take a back seat to any man or any injustice that has become a part of the American norm.

New York Yankees pitcher CC Sabathia once told a reporter that the first thing he does when he faces an opponent is determine how many African-American players the opposing team has.

Sabathia basically implied that so few African-Americans play Major League Baseball that when he finds one it is cause for a celebration.

The first few women to enroll at Harvard University School of Law probably felt the same way even exchanging subtle nods with their few female colleagues at law school initiation.

Unfortunately, Ruth dealt with other things that quickly initiated her into the sexist and misogynistic world of law at an Ivy League institution.

Many professors would not even call on their female students to answer questions in class.

Furthermore, when a professor finally called on one of their female students that student’s remarks would often get cut down by a condescending male classmate.

Additionally, female law students like Ruth often faced condescension from school administrators like Erwin Griswold (Sam Waterston) who seemed unable to fathom why a woman would choose to work in law, or work period for that matter.

But while some prehistoric thinking men might have thought that women could not handle the rigors of law school, Ruth graduates with flying colors while taking care of a family that had numerous issues at home.

But despite graduating at the top of her law class at an Ivy League school, Ruth found it impossible to get a job at a respected law firm.

His wife had to settle for a job as a law school professor at Rutgers University instead of enjoying the exciting rise to success that Martin enjoyed as a tax attorney.

However, a funny thing happens as Ruth becomes a distinguished faculty member at Rutgers University School of Law.

A new generation of Americans, including racial minorities and women, began challenging the status quo and demanding equality and justice for their demographic.

Women became dissatisfied with staying quiet, barefoot and pregnant in the kitchen and took to the streets, classrooms and courthouse to change a society set up to benefit only White men.

Nevertheless, according to “On the Basis of Sex,” the future Supreme Court justice never concerned herself just with one gender or one underrepresented class.

And right is right.

So when a White man faces discrimination because of his gender, Ginsburg speaks out and begins a career speaking up for those without a voice in mainstream society.

In “On the Basis of Sex,” Charles Moritz (Chris Mulkey) never married.

Nevertheless, Charles does have family.

While trying to put food in his stomach and a roof over his head, Charles has to work as a caregiver to his ailing and elderly mother.

However, when it is time for Charles to earn some tax credit to help mitigate the cost of hiring outside help for his mother, the United States government refuses to financially assist him.

Although the tax code that the government sets up to help caregivers plainly exists to provide financial assistance to caregivers, Charles gets no help because he is a man.

The United States government established that specific tax law to help women because as the government sees it, most caregivers are women.

“On the Basis of Sex” also succeeds in producing a pro-woman and feminist film without degrading and totally bashing men.

Too many women in the feminist movement act as if discrimination against men equals fairness for women.

The film “On the Basis of Sex” shows that women can get their equal rights without destroying the rights and importance of their male counterparts.

Furthermore, “On the Basis of Sex,” shows that both men and women should make sacrifices in their marriage in order to uplift their spouse.

Martin cooks and later in life takes a back seat as his wife soars to new heights in the legal profession.

Likewise, when Martin is sick and unable to pursue his dreams of a top-notch legal education, Ruth picks up the slack and carries the family through those dark days.

Martin cooks and cleans, while Ruth sometimes brings home the bacon for him to cook.

The biopic shows the true beauty of a marriage when the couple fights for each other instead of bringing the world’s divisive fights home with them.

If men and women could work together without stepping on the rights of the other, the world would be a much better place.

If men and women could work together in the home while both sacrificing for the success of their mate, families might become more successful.

And if all human beings could live on the basis of what is right and avoid the wrong, the struggles of people like Ginsburg would be worth all of the blood, sweat and tears.