Film Review: ‘The Banker’ The Type of Film Black America Says They Want 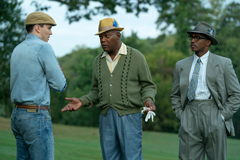 Black America has to see “The Banker.”

Many complain about stereotypical and negative portrayals of Black Americans in movies and television.

However, if one hates the way Hollywood “stereotypically” portrays Black America, then those same people should show their support when Hollywood portrays the Black community gloriously and powerfully.

And glorious, brilliant and powerful describes “The Banker.”

Too bad the film did not come out during Black History Month because “The Banker” encapsulates the story of Blacks in America, which is finding a way to triumph despite the traps set by systemic racism and oppression.

In “The Banker,” Bernard Garrett has a lot of young Katherine Johnson from “Hidden Figures” in him.

Although Bernard comes from the Jim Crow South and has to settle on little jobs like shining shoes, his mathematical ingenuity will never allow him to settle for the racist caste system that wants to keep him and his people subservient and in menial professions.

Young Bernard shines shoes outside of a bank in Willis, Texas.

Although he has mastered shining shoes, he has also mastered eavesdropping on the conversations of professional White people who inadvertently teach him the keys to making a fortune in corporate America.

But unlike Katherine’s parents in “Hidden Figures,” Bernard’s father Britton Garret (Gregory Alan Williams, “Greenleaf”) and the other Black elders of Willis, Texas see the danger in Bernard not knowing his place in the Jim Crow South in the 1930s.

Unsatisfied with the Southern caste system, Bernard (Anthony Mackie) and his wife Eunice Garrett (Nia Long) decide to move to Los Angeles in 1954, trading their home and somewhat comfortable life in Texas, to live in Eunice’s uncle’s shed.

Bernard has a gift for numbers and an expertise in real estate.

Therefore, he believes that the more liberal Los Angeles would serve as a better place for him to spread his wings and create wealth for his family.

Not only does Bernard have ingenuity and expertise, he also has vision.

He sees a future for some properties in Los Angeles, commercial and residential, that others in his profession simply do not see.

Unfortunately, people in the real estate industry can see the color of Bernard’s skin, and that prevents him from truly cashing in on his potential.

The brother cannot even get a meeting with the bank manager to even discuss a loan.

However, with the help of Eunice’s old boss at the Plantation Club, Joe Morris (Samuel L. Jackson), and a “green” White boy named Matt Steiner (Nicholaus Hoult) who works with Bernard’s cousin Tony Jackson (Jessie T. Usher, “Almost Christmas”) the new treacherous trio devises a way to dupe the banking and real estate industry in Los Angeles, racking up a fortune before the racist real estate business knows that they have gotten duped.

Although Bernard and Joe have brilliant minds when it comes to money and business, they do not have the complexion for the protection to quote comedy legend, Paul Mooney.

However, Matt does have the complexion for the protection.

Although Matt knows absolutely nada about the banking or real estate business, he has White skin so that qualifies him in the minds of some bigoted businesspeople.

Matt can get his foot in the door because of his skin color.

So if Bernard and Joe can teach him the ins and outs of the business and form a three-way partnership, they can take over the real estate game in the “City of Angels.”

The only problem is that the business does not come easily for Matt at all.

And although Matt had a reputation of excelling at sports at Hollywood High School, he is no longer in high school and his adolescent athletic prowess did not include hitting a golf ball with a club at a ritzy country club.

Therefore, to make sure this elaborate charade works; Bernard, Joe and Eunice have to go to work on the unsophisticated Matt.

Bernard teaches Matt the ins and outs of the real estate business, including the numbers game.

Joe teaches Matt the basics about golf before teaching him the advance course for the golf course.

And lastly, Eunice teaches Matt about dinner etiquette, like working from the outside in when it comes to one’s eating utensils.

Despite the proper training, banking and real estate can become tricky businesses.

But sometimes, accounts get overdrawn.

Furthermore, properties can appreciate or depreciate over time and one has to have knowledge of when to hold them and when to fold them.

Thankfully, as “The Banker” progresses the film keeps appreciating and appreciating before reaching a dramatic conclusion and twist that proves the ingenuity of those bankers.

First and foremost, “The Banker” boasts the extremely talented Jackson, Long and Mackie so superb performances were never in question.

Imagine having genius running through your veins and someone forces you into menial work because of your skin color.

Imagine Albert Einstein working as a chauffeur or a janitor with his intellect.

One cannot imagine that because it would never have happened to Einstein unless his skin had mysteriously changed colors.

But Black geniuses had to deal with the pain of seeing their talents wasted, even if their talent would have helped the community at large, not just the Black community.

However, “The Banker” also shows the hope that comes from defying the status quo, and the pride that the older generation shows towards their younger counterparts when they start kicking Jim Crow’s behind once and for all.

The strength that the ancestors mustered should never be taken for granted in the 21st century, and beyond, and those stories should be celebrated and appreciated by Black Americans every time they grace the big or small screen.

“The Banker” is now playing at the iPic Houston.